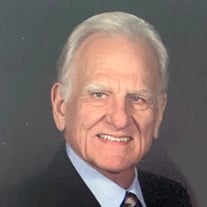 Fort Worth, Texas - Charles Swanson “Chuck” Anderson passed away at home on January 9, following a lovely family gathering. He was 81. A Memorial Service will be held at 1pm Thursday, March 3, at First United Methodist Church of Fort Worth, 800 W. Fifth Street. A Celebration of His Life will follow at Colonial Country Club, 3735 Country Club Circle. Born in Topeka, Kansas, Chuck was the son of Jack William and Verna Swanson Anderson. He was raised in Osage City, Kansas and received his Bachelor's degree and Master of Public Administration degree from the University of Kansas where he was a member of Sigma Phi Epsilon. After his years at KU, Chuck received an appointment to the Navy Officer Candidate School where he served for three years of active duty and continued to serve in the U.S. Navy Reserve for 24 years, retiring with the rank of Captain. He married the love of his life, Sherril Murrow, whom he met at KU, in 1964. They raised their two sons, Jeffrey Charles and Christopher John, in the Midwest and Dallas. Following his active service with the Navy, Chuck began his many years in public service as a City Manager, including in Liberty, Missouri, Lakewood, Colorado, and Dallas. One of many career highlights, he was appointed Executive Director of the Dallas Area Rapid Transit (DART) where he led the team that designed the system, acquired the right of way, and commenced rail construction on what is today considered among the most effective and longest transit systems in the nation. Chuck’s tremendous experience and work ethic then took him to the staff of the International City and County Management Association (ICMA) in Washington, D.C. where he advised Central and Eastern European countries on government efficiency. After his work with ICMA, he was appointed Executive Director for the Michigan Education Association (MEA) where he supported one of the largest teachers’ unions in the nation. Desiring to be closer to their sons’ families, Chuck and Sherril moved back to Texas in 2005, where he worked for Waters Consulting as an executive recruiter focusing on public management. Spanning his impressive 54-year career in public service and private business, Chuck served on numerous boards related to his professional work and community service. He also received dozens of awards and accolades for his leadership. Notwithstanding his considerable career accomplishments, Chuck deeply cherished and was most proud of his 57-year marriage to Sherril, his two sons, Jeff and Chris, their spouses, Kristin and Jennifer, and his four grandchildren, Ellie, Catherine, Anna Claire and Charlie. He was also passionate about history, politics, music, theater and his pets. He enjoyed attending theater performances with Sherril and shared many years singing with her in their church choirs, most recently as members of the Choral Union at First United Methodist Church in Fort Worth. He attended theater performances and athletic games for his grandchildren and was unrivaled at obscure political historical trivia in competitive family games. His best attribute was that he never failed to tell every family member how much he loved them as often as he could. Chuck is preceded in death by his parents, his sister, Jackie Fink and his brother-in-law, Paul Fink. In addition to his loving wife, Sherril, Chuck is survived by his sons and their wives, Jeff and Kristin Anderson and their children, Catherine and Charlie, and Chris and Jennifer Anderson and daughters, Ellie and Anna Claire; his brother-in-law, David Murrow; his loving nieces, Susan Bradley and her husband, Mike, and Sara Houston and her husband, Bill; and nephews, John Fink and his wife, Stefani, and Paul McElroy. He ended every correspondence with “Cheers, Chuck.” In that spirit, his family would like to offer a Cheers to Chuck - a wonderful husband, father, Papa, brother, son, uncle, colleague and friend. He built a legacy of love and service and will be greatly missed. Consideration of contributions to The Women’s Center of Tarrant County, www.womenscentertc.org., in his memory, is suggested. To send flowers or a memorial gift to the family of Mr. CHARLES SWANSON "Chuck" ANDERSON please visit our Sympathy Store.
To order memorial trees or send flowers to the family in memory of CHARLES SWANSON "Chuck" ANDERSON, please visit our flower store.
Send a Sympathy Card