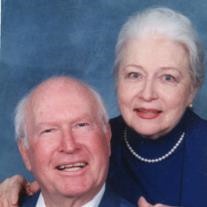 FORT WORTH -- Dalia Teresa Black Scott passed away peacefully Sunday morning, December 30, 2018. Mrs. Scott was 88. Service: 10:30 a.m. Friday in the Chapel of the Intercession at First Presbyterian Church, 1000 Penn St. Family and friends will gather in the church’s Parlor immediately following the service. She will be laid to rest next to her husband, Raymond, at Newberry Cemetery in Dennis. Born April 28, 1930, in Tampico, Mexico, Dalia was the third of six children of Wayne Norris and Teresa Friederichsen Black. Known to her grandchildren as “Lita,” she spent her life as a domestic engineer raising her three boys and caring for her husband, Raymond. Her faith in God and love of Christ showed brightly to her family and friends. Dalia met the love her life at Mo Ranch during a Christian retreat. They were married at the Chapel in the Woods at TWU campus in Denton, where she was attending college, on March 7, 1954. Dalia enjoyed traveling, dancing, painting, sewing, gardening and cooking. It was well known if you entered the Scott home you were going to be fed. You were greeted by “have you eaten?” and even before you could answer the statement of “sit down at the table” was commanded. She had a single request upon her death, that a fork be placed in her hand as a symbol to all that “the best is yet to come!” Her memberships included the First Presbyterian Church of Fort Worth, the International Good Neighbor Council, Pan American Round Table, and La Sertoma Club. She was preceded in death by her parents; her husband of 63 years, Raymond “Scotty”; son, James Wayne Scott; daughter-in-law, Kazuko Scott; sisters, Yolanda Harrison and Sonia Cowan. Survivors: Dalia is survived by her sons, Raymond L. Scott Jr., Roger Alan Scott and his wife, Kimberly, and Richard D. Scott and his wife, Wendy; grandchildren, Daniel and his wife, Brandie, Michael, Joshua, Elizabeth, Forrest, Ilana, Christina Luquis and her husband, Sam Ducklow, and Joshua Luquis; great-granddaughter, Lavinia; brothers, William Black and his wife, Vivian, Wayne Black and his wife, Sondra, Victor Black and his wife, Chris; and many nieces and nephews and their families. To send flowers or a memorial gift to the family of Mrs. DALIA TERESA BLACK SCOTT please visit our Sympathy Store.
To order memorial trees or send flowers to the family in memory of Mrs. DALIA TERESA BLACK SCOTT, please visit our flower store.