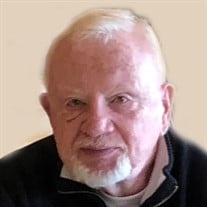 Allen, Texas – Daniel Marvin Russakov passed away Sunday morning, February 6. He was 84. Following committal prayers on Tuesday, February 8, he was laid to rest next to his wife, Jane, in Ahavath Sholom Cemetery. Born in Philadelphia, Pennsylvania, Dan was the son of Leon and Molly Russakov. He received his teaching degree in special education at Westchester State outside of Philadelphia and started his career in special education in Philadelphia before moving to retail management. In 1961, Dan married Jane Cohen Russakov. Soon after, they welcomed two sons, Michael in 1963, and David in 1966. In 1970, the family relocated to Fort Worth where their daughter Jamie was born later that year. Dan’s career and family thrived in Texas as he ultimately became the President of Ryon’s Western Wear in the Stockyards before owning and operating a travel agency. After retiring from the travel business, Dan returned to his professional roots and true passion with the Fort Worth Independent School District as an aid to hearing and sight-impaired students. Affectionally known as “Mr. Dan” to his students and colleagues, he found a tremendous amount of joy in helping students accomplish their dreams. Dan loved spending time with his group of friends for weekly poker games and vacations. Most of all, Dan was a dedicated husband, father, grandfather, brother, and uncle. He could always be counted on to attend sporting events and other family outings, rooting on his grandchildren and nephew from the sidelines. He was preceded in death by his parents, wife and brother, Dr. Alan Russakov. Dan received extraordinary care from the hospice team at Texas Home Health and his caregivers led by Jeanetta Thompson. The family would also like to extend a special thank you to his friend Judy Brummett. In addition to his children, Michael of Allen, and David and his wife, Stephanie also of Allen, and daughter Jamie Clair and her husband, Bill of Gilmer, Dan is survived by four grandsons, Adam and Jake Clair, and Preston and Tyler Russakov. He will also be remembered by sisters-in-law, Nancy Spiegel and Gloria Russakov; nieces, Mara Rosenberg and Becky Levitt and her husband, Sheldon; and nephews, David Spiegel and his wife, Samantha, and Joshua Russakov. Memorials: Dan was a dog-lover at heart and dedicated to supporting children. In lieu of flowers, consideration of contributions to the Humane Society of North Texas or to St. Jude Children’s Research Center, in his memory, is suggested. To send flowers or a memorial gift to the family of Mr. DANIEL MARVIN RUSSAKOV please visit our Sympathy Store.
To order memorial trees or send flowers to the family in memory of DANIEL MARVIN RUSSAKOV, please visit our flower store.