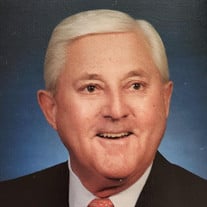 Fort Worth, Texas - Donald Clinton Foard Jr. passed away peacefully Sunday evening, November 21. Don was 83. A Service at the Grave was held on Saturday, November 27, in Sulphur Springs at Restlawn Memorial Park. Born in Conchas Dam, New Mexico, Don was the son of Mary Parker and Donald Foard, Sr. He grew up in Houston and attended the University of Houston. He was a member of University Christian Church in Fort Worth, Texas. A longtime member of Colonial Country Club, Don served in many capacities as part of the club’s golf tournament, including being a member of the Tournament Committee, Marshal’s Chairman, and Vice-Chairman of Tournament Operations. He was inducted into the “Pride of the Plaid” in 1999 as recognition of his many years of service. Don was a member of University Christian Church who loved his family and friends dearly. He was always gracious and generous, wanting everyone around him to enjoy life to the fullest. Happiest outdoors in the sunshine, Don enjoyed being on beach trips, playing golf and hunting. His approach to life and work was that, “You are never wrong if you tell the truth!” His generosity and honesty will be greatly missed. In addition to his wife, Martha Brumley Foard, Don is survived by his daughter and son-in law, Holly and Terry Fain; two grandchildren, Will and Alli; his sister, Saundra Galloway and brothers David and Robert, and their families. In lieu of flowers, consideration of a donation to the MD Cancer Center, Houston, Texas, in his memory, is suggested. To send flowers or a memorial gift to the family of Mr. DONALD CLINTON FOARD Jr. please visit our Sympathy Store.
To order memorial trees or send flowers to the family in memory of Mr. DONALD CLINTON FOARD Jr., please visit our flower store.