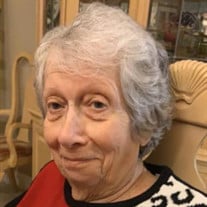 Fort Worth, Texas - Doris Ann Drasnin Smith passed away peacefully on January 1. She was a beloved wife, mother, grandmother, sister, aunt and cousin. Following a Service at the Grave on Tuesday, January 4, she was laid to rest in Ahavath Sholom Cemetery. Born in Cincinnati, Ohio, Doris was the daughter of Bernard and Mae Schneider Drasnin. She graduated from The University of West Virginia in 1952. Doris worked as a Social Worker and later as a Coordinator for the Senior Program at the JCC and as a substitute teacher in Utica, New York. She married her beloved husband Yale Smith on August 7, 1955. They were married 42 years, raised two sons and lived in Cincinnati, Ohio and Utica, New York. Doris moved to Fort Worth in 1998 after Yale’s passing. She loved spending time with her family. Doris enjoyed antiquing, gardening, listening to all kinds of music, and shopping. She also enjoyed participating in the Fort Worth Newcomers Club in their Book and Gardening Clubs. She was a past member of the Fort Worth Garden Club. Her greatest joys were her two granddaughters. She enjoyed taking them out to lunch, shopping and going to the zoo. Doris was a member of Temple Beth El in Utica, New York and Congregation Ahavath Sholom in Fort Worth. She was preceded in death by her parents, husband, Yale, and brother, Ron Drasnin. In addition to her sons, Martin L. Smith and Mitchell A. Smith and his wife, Annette Klemow-Smith of Fort Worth, Doris is survived by her grandchildren, Melanie Smith Robertson and her husband, Klint of Northlake, and Courtney Smith Upp and her husband, Michael of Fort Worth; and sister-in law, Linda Drasnin of Cincinnati, Ohio. To send flowers or a memorial gift to the family of Mrs. DORIS ANN DRASNIN SMITH please visit our Sympathy Store.
To order memorial trees or send flowers to the family in memory of Mrs. DORIS ANN DRASNIN SMITH, please visit our flower store.
Send a Sympathy Card