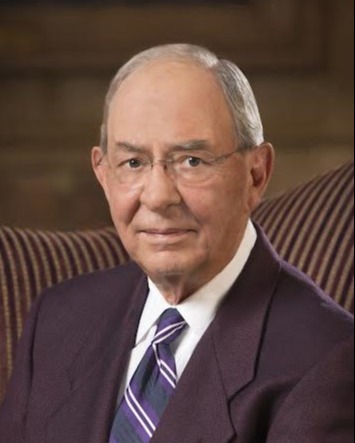 A Memorial Service celebrating his life will be held at 2:00 p.m. Thursday, October 27, at University Christian Church, 2720 S. University Drive, with a reception to follow at the Legends Club, Amon G. Carter Stadium, on the TCU Campus.

A native of North Carolina, Bill was born in Charlotte at The Crittendon Home for Unwed Mothers and named Stanley Perry. When he was about a year old, Ethel and Cecil Tucker adopted him, and he became a Tucker. Shortly thereafter, the family of three moved to the Village of Grimesland in the eastern part of the state. His father died six years later, and Bill grew up under the guidance of his mother. They continued to live in Grimesland, but he graduated from high school twelve miles away in Greenville. To do so, he hitchhiked to school and back home every day throughout his junior and senior years.

After two years as a day student at East Carolina University, Bill transferred to and graduated from Atlantic Christian College (now Barton College). Then he earned a B.D. (now M.Div.) degree from Brite Divinity School and M.A. and Ph.D. degrees from Yale University. A straight honors student at Yale, he took quiet pride in the achievement. Bill was educated to be a scholar but early in his career, to use his words, “he fell while climbing up the academic ladder and became a full-time administrator”.

An ordained minister of the Christian Church (Disciples of Christ), he spent his career in church-related higher education. After teaching and chairing the Department of Religion and Philosophy at Atlantic Christian College, he taught church history at Brite Divinity School and, in time, became Dean of the seminary. Then he moved to West Virginia to be President of Bethany College before returning to TCU as Chancellor. He served as Chancellor from 1979 to 1998.

The church claimed Bill’s leadership in various ways. Moderator of the Disciples in the United States and Canada from 1983 to 1985, he co-authored with Lester McAllister a comprehensive history of the denomination entitled Journey in Faith. Bill’s first book, a modest revision of his Ph.D. dissertation, attracted very few readers but, surprisingly, is still available in paperback.

Bill also devoted time and energy to a number of boards in Fort Worth and beyond. They included the Brown and Lupton Foundation and the Amon Carter Museum of American Art.

Quick to say so, Bill stood on the shoulders of great mentors and colleagues who touched him for good along the way. His greatest blessing was a full life with Jean Jones Tucker, his wife, and his helpmate. The two met as TCU students. Last April, they celebrated their 67th wedding anniversary.

Memorials may be made to Texas Christian University for the William E. Tucker Endowed Scholarship Fund or The Old Jail Art Center in Albany, Texas.

To order memorial trees or send flowers to the family in memory of Dr. WILLIAM EDWARD TUCKER, please visit our flower store.