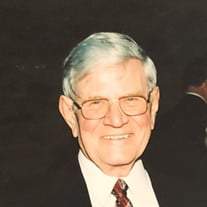 FORT WORTH – Earl Aaron Givant passed away peacefully Monday morning, December 18, 2017. Mr. Givant was 90. SERVICE: 1 p.m. Thursday, December 21, in the Kornbleet Memorial Cemetery Chapel, located in Ahavath Sholom Cemetery, 411 N. University Drive. Rabbi Andrew Bloom and Cantor Shoshana Abrams Kaikov will officiate. Following committal prayers, he will be laid to rest in the cemetery. Shiva will be held at the residence on Thursday with minyan services beginning at 6 p.m. MEMORIALS: The family respectfully requests that no flowers be sent. However, consideration of contributions to Congregation Ahavath Sholom, Jewish Family Services or to a charity of your choice, in his memory, is suggested. Born in Des Moines, Iowa on January 3, 1927, Earl was the son of Mendell and Ida Shostik Givant. After serving in the U. S. Navy, he moved to Omaha, Nebraska where he met his wife, Shirley Fried, with whomo he raised their two children. Earl’s career with Sears spanned 40 years and is the very thing that brought him to Fort Worth. He was active in Congregation Ahavath Sholom, the synagogue’s Chevra Kadisha and the Martin Hochster Jewish War Veterans Post #755. His memberships also included the East Side Boosters Club, the Masonic Lodge, Scottish Rite Bodies and the Masonic Shrine. He was a past board member of Jewish Family Services, the Molly and Max Barnett B’nai B’rith Housing, the Isadore Garsek Lodge of B’nai B’rith and the Monarch Hills Association. He was a loving husband, father, grandfather and great-grandfather, as well as a all around mensch, “A Good Person.” SURVIVORS: In addition to his wife of 68 years, Shirley, Earl is survived by his children, Maureen Nover and Michael Givant; he was grandfather and great-grandfather to Matthew Nover and his wife, Heather, and their daughter, Jane. To send flowers or a memorial gift to the family of Mr. EARL AARON GIVANT please visit our Sympathy Store.
To order memorial trees or send flowers to the family in memory of Mr. EARL AARON GIVANT, please visit our flower store.