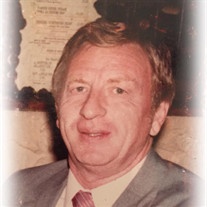 FORT WORTH -- Easer R. Rovinsky, beloved husband, father, grandfather, great-grandfather, uncle and friend to so many, passed away Saturday evening, Dec. 3, 2016. Mr. Rovinsky was 85. Service: 11 a.m. Monday in the Kornbleet Memorial Chapel, located in Ahavath Sholom Cemetery, 411 N. University Drive. Rabbi Andrew Bloom and Cantor Shoshana Abrams Kaikov will officiate. Following committal prayers, he will be laid to rest in the cemetery. Minyan services will be held at Congregation Ahavath Sholom, beginning at 6 p.m. Monday. Memorials: In lieu of flowers, consideration of contributions to a charity of choice, in his memory, is suggested. A lifelong resident of Fort Worth, Easer was the son of Ruben and Sarah Horn Rovinsky. His love story with Joyce Weinstein began in 1948 when he would travel with members of his Fort Worth youth group to play basketball with the Dallas youth group at the Jewish Community Center, where they met. December 25 would have been their 66th wedding anniversary. Known for his sense of humor, which he kept to the very end, Easer was always playful and fun-loving. Once retired, he loved his job as a product demonstrator at Sam's Club. He was adored by customers and co-workers alike. His memberships included Congregation Ahavath Sholom, its Men's Club, the Martin Hochster Jewish War Veterans' Post #755 and B'nai B'rith International. Easer served in the U.S. Army during the Korean War. The family would like to express its appreciation to Dr. Barbara Birdwell and her staff, Texas Oncology and its staff, and VITAS Hospice for the care given and many kindnesses shown to Easer during his illness. He was preceded in death by his parents and brother and his wife, Aaron and Bess Rovinsky. Survivors: In addition to his wife, Joyce, Easer is survived by his children, Joel and Gail Rovinsky of Houston, Steven and Tracey Rovinsky of Fort Worth, and Felicia and Robert Rubin of Dallas; grandchildren, Amy and Jason Sandler, Jeffrey Rovinsky, Douglass Rovinsky, Alex and Shannon Rovinsky, Caitlinn Rovinsky, Rachel and Mark Abbott, and Mark Rubin; great-grandchildren, Chase, Matthew, Ellisyn and Evelynn; and nieces and nephews and their families. To send flowers or a memorial gift to the family of Mr. EASER REFUL ROVINSKY please visit our Sympathy Store.
To order memorial trees or send flowers to the family in memory of Mr. EASER REFUL ROVINSKY, please visit our flower store.
Send a Sympathy Card