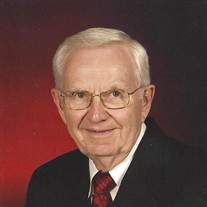 FORT WORTH -- Edward Sanders “Ed” Anderson, Jr. went to be with his Savior, Christ the Lord on Saturday evening, February 11, 2017. Mr. Anderson was 88. Memorial Service: A Celebration of his Life will be held at 1 p.m. Saturday at Trinity Lutheran Church, 3621 Tulsa Way. Memorials: Consideration of contributions to Trinity Lutheran Church, Lutheran Bible Translators (Concordia, MO), CureSMA.org (Spinal Muscular Atrophy), Parkinson Disease Foundation or charity of your choice, in his memory is suggested. Born in Gary, Indiana on June 2, 1928, Ed was the son of Edward S. and Ruby Billert Anderson. His parents moved to Waco when he was 18 months old; he graduated from Waco High School in 1945. Ed then earned his electrical engineering degree from Texas A&M University in 1949. While at A&M he was a member of the Corp of Cadets and was first chair trombone in the Aggie White Band. Throughout his lifetime, he continued to have a love for all types of music, especially marching pieces and classical. Ed worked 44 years at Texas Electric Service Co. and finished his career with Texas Utilities Co. He was a registered Professional Engineer and a lifetime member of IEEE. After he retired, he and his wife, Marie, were able to finish traveling to 49 U.S. states as well as Europe. He loved studying the maps and planning his trips almost as much as taking the trips. He also was employed at the Texas Rangers Baseball Museum, conducting tours of the sports facility as well as the Museum. The Museum position gave Ed a chance to smile and interact with people - two of his favorite things to do. He was a loving husband, wonderful father, grandfather and great grandfather and a very kind and gentle person to all that knew him. The family would like to thank his wonderful caregivers, Gina and Arlon Hill, Envoy Hospice, Vangie, Sylvia, Joanne, and, Martha at Rose Cottage, plus his wonderful “family” at Trinity Lutheran Church that provided love and support to both Ed and Marie. Survivors: In addition to his loving wife of 66+ years, Marie Jungerman Anderson, Ed is survived by his children, Ben Edward Anderson and his wife Celeste, and daughter, Rose Anderson Thomas and her husband Pat McLean; grandchildren, Jordan Anderson and his wife, Annie, and Heather Gingrich and her husband, Troy; along with four great-grandchildren, Magnolia and Phoenix Anderson and Sarah and Will Gingrich; special cousin, Bill Bryan and his wife, Margie; and other cousins and dear friends. He was blessed to get to know step-grandchildren, Jesse McLean (Maggie), and Karen McLean; as well as twin step great-granddaughters, Keegan and Olivia McLean; and to participate in his daughter’s family life with her other step-children, Josh Doherty (Dawn), and Molly Doherty Hensley (Sean); and four other step great-grandchildren, Will Doherty, and Drake, Jacob and Jaden Hensley. To send flowers or a memorial gift to the family of Mr. EDWARD SANDERS ANDERSON Jr. please visit our Sympathy Store.
To order memorial trees or send flowers to the family in memory of Mr. EDWARD SANDERS ANDERSON Jr., please visit our flower store.