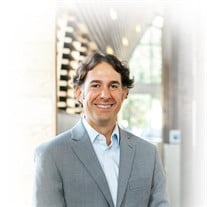 Fort Worth – Elias James "E.J." Nader, loving husband, father, son, and friend, was welcomed into the arms of his Savior Tuesday, December 26, surrounded by his loving family and friends after complications from a surgical procedure. Mr. Nader was 41. His body has been donated, at his request, to UT Southwestern Medical Center for research and education purposes. Memorial Service: Friends are invited to join the family at 10 a.m. Thursday at First United Methodist Church for a celebration of Christian life. Afterward, a reception will be held at Colonial Country Club. Memorials: Friends of E.J. and Sarah have established a fund in his memory for the benefit of their daughters, Ashleigh and Alexis. Contribution to the fund, in lieu of flowers, is suggested. Those who wish to contribute may make a gift to: NADER FAMILY FUND, c/o Barney Wiley, Trinity Bank, NA, 3500 W. Vickery Blvd. Fort Worth, TX 76107. Born February 16, 1976 in Savannah, Georgia, Elias James "E.J." was the oldest of four sons born to James and Kay Nader. E.J. was a scholar and athlete at R. L. Paschal High School. Upon graduation from high school in 1994, he entered T.C.U. where he attained undergraduate degrees in both accounting and finance, graduating Magna Cum Laude in 1998. He was named Senior Scholar for the School of Accounting at the College of Business. E.J. then obtained a Master’s Degree in Public Accounting from the University of Texas in 1999. While a senior at Paschal, he met his adoring wife and best friend, Sarah Van Horn, to whom he married September 4, 1999 in Fort Worth. E.J. was employed from 1999-2001 with Arthur Andersen, LLP in Dallas and Austin. In 2002 E.J. was recruited to the Fort Worth office of KPMG, where he was a Senior Associate. His primary experience was within the financial services industry including private equity funds, venture funds, hedge funds, credit funds, and business development companies. He served as primary recruiter for the Fort Worth office, including oversight of campus development responsibilities for TCU and UTA. Upon returning to Fort Worth in 2002, E.J. and Sarah became members of First United Methodist Church in Fort Worth and have continued to increase their service as their family grew under the influence of Christ through the Church. E.J. was called from public accounting to become the Chief Financial Officer of Tailwind Advisors in 2014, and went on to serve as C.F.O. of all Tailwind subsidiaries, including Tailwind Oil and Gas, as well as their Investment funds. His interests included his work, golf, running, friends and teammates from school, work and Colonial Country Club. Above all was his love for his girls, Sarah, Ash, and Lexi. The family wishes to extend special thanks to friends and colleagues, Zach and Noelle Garzek, Judd and Jacque Pritchard, Bryan and Janice Barrett, and the entire Tailwind Team for their support during this difficult time. He was preceded in death by grandparents, Richard and Velma Nader, and Kenneth and Frances Brimer. Survivors: In addition to his wife, Sarah, and daughters, Ashleigh and Alexis Nader, E.J. is survived by his parents, James and Kay Nader; brothers, Rev. John Nader and his wife, Casey, Rev. Joseph Nader and his wife, Mary Kathryn, and Jordan Nader and his wife, Jennifer; and numerous beloved extended family members. To send flowers or a memorial gift to the family of Mr. ELIAS JAMES "E.J." NADER please visit our Sympathy Store.
To order memorial trees or send flowers to the family in memory of Mr. ELIAS JAMES "E.J." NADER, please visit our flower store.
Send a Sympathy Card