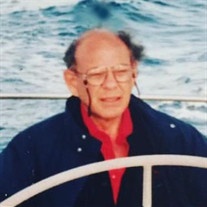 FORT WORTH – Emiliano Roberto Rafael Manresa y Gonzalez passed away peacefully Saturday afternoon, December 22, 2018. Mr. Manresa was 80. SERVICE: A service at the grave will be held at 2 p.m. Friday in Oakwood Cemetery with The Rev. Melanie Barbarito of All Saints Episcopal Church officiating. Born in November 12, 1938 in Caibarien, Cuba, Emiliano was the son of Maximiliano and Lidia Manresa. Sometimes called “Emilio” or “Pope,” came to the United States in the late 1950s to attend college in Tennessee. He graduated from University of Tennessee Chattanooga with a degree in engineering and attended Georgia Tech for graduate studies. Emilio had a passion for cooking and delighted in sharing his gourmet skills with family and friends. His love of fine food, wine and travel helped to ignite his desire to see the world. He and his beloved Estella traveled extensively, which paired with their mutual love of dancing, led them to essentially salsa their way across the globe. As an avid lover of Cuban music, he often charmed party goers with his Latin moves. To see him on the dance floor was a site to behold. His endless quest for adventure took him on a “once-in-a-lifetime” sailing trip along the route that was traveled by Christopher Columbus. For one month, he sailed across the Atlantic Ocean, through the Azores and anchored in Barcelona, Spain, a city situated just south of Manresa, a town his early ancestors called home. His family would like to thank his friends, including Dick Steed, who, throughout the years tirelessly assisted Emilio with any request. SURVIVORS: In addition to his lifelong companion, Estella Gillis “Tookie” Johnson, Emilio is survived by her daughter, Michelle, and granddaughter, Arden; his daughters, Robin Manresa Ayala and Elizabeth Manresa; sons-in-law, Armando Ayala and Teddy Eynon, his five grandchildren, Maximilian and Lola Ayala, and Hudson, Brooks and Gates Eynon; his sister, Sara Meneses; and many family members from Cuba. To send flowers or a memorial gift to the family of Mr. EMILIANO ROBERTO MANRESA please visit our Sympathy Store.
To order memorial trees or send flowers to the family in memory of Mr. EMILIANO ROBERTO MANRESA, please visit our flower store.