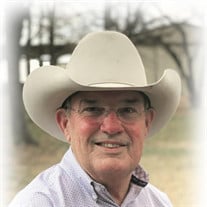 Fort Worth – Eric S. Johnson passed away unexpectedly Friday morning in Miramar Beach, Florida. Mr. Johnson was four days from his 70th birthday. Service: A celebration of his life will be held at 10:30 am Monday, September 13, at Christ Chapel Bible Church, 3701 Birchman Avenue; the service will be livestreamed at www.ccbcfamily.org\memorials. Following the service, he will be laid to rest in Greenwood Memorial Park. Family and friends will gather from 2 to 4 pm Sunday in the Great Room at Robertson Mueller Harper. Memorials: While flowers are appreciated, consideration of contributions to Trinity Lutheran Children’s Center, 3621 Tulsa Way, Fort Worth, TX 76107, Christ Chapel Bible Church, 3701 Birchman Avenue, Fort Worth, TX 76107, or Jewel Charity, 3301 Hamilton Avenue, #121, Fort Worth, TX 76107, in his memory, is suggested. Born in Garland, Eric was the son of Eric Oscar and Betty June Brewer Johnson. He graduated from Garland High School, and earned a B.S. in Agriculture from East Texas State University. After selling equipment for Plains Machinery, Eric began a 37-year career with Austin Bridge & Road. He was a servant leader, well respected by his colleagues and proud to lead and mentor those who worked with him at the company and in the industry. Eric met the love of his life, Jennifer Nelson, they celebrated 34 years of marriage in May. She was his treasure and best friend. He was immensely proud of all five of his children and made time each day for them. Eric’s foundation was firm in Jesus Christ. He took time to listen to strangers who approached him and would come home and tell his family about the conversations. His family was his pride and joy and was often referred to as coach, supporter, mentor, teacher and friend. He enjoyed coaching baseball and softball at University Little League where he coached all three of his children. He never missed a dance recital or Paschal High School football game where he watched his daughters proudly cheer on the football team. A passion for hunting and fishing, Eric loved spending time at the family ranch and especially loved running cattle on the ranch. He loved serving his family and small group from Christ Chapel and his favorite nights were spent cooking for his family at home. Serving was a huge part of Eric’s life. On the 3rd Sunday of the month, you could find him in the parking lot at Christ Chapel serving with the parking posse. He was a member of the Men’s Bible Study Fellowship on Monday nights, a longtime member of TXAPA serving as President and most recently was a member of its Board of Directors. He was also an active member of the Association of General Contractors. Eric was one of a kind always putting others before his needs. We are In addition to his loving wife, Jennifer, Eric is survived by his sons, Eric Russell Johnson and his wife, Katie of Morgans Point, and Justin Wade Johnson and his wife, Dustin of Scottsbluff, Nebraska, and Jeffrey Mitchell Johnson and Ana Tjugum of Lipan; his daughters, Erica Pifer and her husband, Sean, and Abigail Hoekstra and her husband, Stephen, all of Fort Worth; grandchildren, Clay, Kylee Jo, Gavin, Paytyn, Kammie, Jane, Stetson, Trevor, Hazen and James Nelson; brother, Larry Johnson and his wife, Angie of Leander; sister, Jerilyn Howell of Garland; and numerous beloved family and friends. To send flowers or a memorial gift to the family of Mr. ERIC STANLEY JOHNSON please visit our Sympathy Store.
To order memorial trees or send flowers to the family in memory of Mr. ERIC STANLEY JOHNSON, please visit our flower store.
Send a Sympathy Card