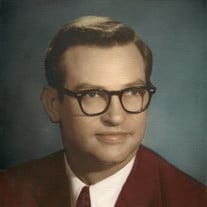 FORT WORTH – George William “Bill” Brown, retired businessman, passed away peacefully at home Thursday morning, February 15, 2018. Mr. Brown was 85. SERVICE: A service at the grave will be held 11 a.m. Tuesday at Moore Memorial Gardens, Arlington. Family and friends will gather from 5 to 7 p.m. Monday in the Great Room at Robertson Mueller Harper. MEMORIALS: In lieu of flowers, consideration of contributions to your favorite church or charity, in his memory, is suggested. Born in Fort Worth on April 20, 1932, George was the son of Ben A. and Annie Mae Brown. He was 1950 graduate of North Side High School. Within months the Korean War had begun and George enlisted in the U. S. Air Force. After serving overseas, he married his longtime sweetheart, Mary Elizabeth Campbell, on October 18, 1952. Following the wedding, George’s Air Force assignment took them to Washington, D.C. where he worked in the 1005st Special Investigations Group at Bolling Air Force Base. Upon his discharge, George attended Arlington State College, now the University of Texas at Arlington, and started his banking career. While working in banking, he was active in civic affairs, including two terms as president of the Arlington Chamber of Commerce, 1970 to 1972, and serving ten years on the Arlington Planning and Zoning Commission. Five of those years, he served as chairman, 1963 to 1973. George was one of the organizers of the North Texas Commission and served on the board as secretary. In 1977, George and Elizabeth moved to Kingsville where he organized and served as president of Kleberg County Savings for nine years. He was offered a position with the Texas Savings and Loan Department as a special examiner and investigator. From 1990 until 1998, George was Executive Vice President of Kleberg First National Bank in Kingsville. After retiring, he and Elizabeth moved to Fort Worth to be near family. They were caregivers to Elizabeth’s mother, Mary Campbell; George also cared for Elizabeth, his wife of over 63 years, until her death in May of 2016. George was a member of Arlington Masonic Lodge #438, Arlington Chapter and Council Knights Templar and Moslah Shrine in Fort Worth. SURVIVORS: In addition to their children, Tommy, David, Dorothy and Kathey, George and Elizabeth were blessed with many grandchildren and great-grandchildren. To send flowers or a memorial gift to the family of Mr. GEORGE WILLIAM "Bill" BROWN please visit our Sympathy Store.
To order memorial trees or send flowers to the family in memory of Mr. GEORGE WILLIAM "Bill" BROWN, please visit our flower store.
Send a Sympathy Card