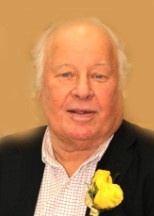 Aledo, Texas - Gordon Frederick Sagebiel went to be with the Lord on Sunday afternoon, August 14.  Mr. Sagebiel was 76.

Born in Fredericksburg, Texas, Gordon was the son of Erwin and Esther Mohr Sagebiel.  He grew up on the family ranch and was baptized and confirmed at St. John Lutheran Church in Crabapple.  Gordon attended Cherry Springs one room schoolhouse and graduated from Fredericksburg High School.  He married his college sweetheart, Donna Martin Sagebiel on April 8, 1967 at Trinity Lutheran Church in Fort Worth.  Together they have 4 children and 10 grandchildren.  After marrying, he served in the United States Air Force for 4 years.  Gordon graduated from Texas A&M University in 1973 and worked for the U.S. Army Corps of Engineers until retiring.  Gordon was an avid outdoorsman and enjoyed hunting, fishing, woodworking and gardening.  His greatest joy was spending time with his family. He was preceded in death by his parents and brothers-in-law, Kenneth Lochte and Bill Burt.  In addition to his loving wife of 55 years, Donna, Gordon is survived by his children, Richard and Nancy Sagebiel of Bastrop, Jason and Dr. Anna Sagebiel of Clive, Iowa, Rev. Jennifer Gold and Chris of Marion, and Dr. Kayla Sweet and Michael of Buda; grandchildren, Daniel, Grace, Hannah, and Rayann Sagebiel, Wyatt and Wayde Sagebiel, Zachary and Zane Gold, Kyle and Matthew Sweet; siblings, Roselee Lochte, Kenneth and Barbara Sagebiel and Nathan Sagebiel; and numerous nieces and nephews and other loving family members and friends. Family and friends will gather from 5 to 7 p.m. Thursday, August 18, in the Great Room at Robertson Mueller Harper.  A Celebration of His Life will be held at 11 a.m. Friday, August 19, at Trinity Lutheran Church, 3621 Tulsa Way, with interment to follow in Greenwood Memorial Park.

Consideration of contributions to Trinity Lutheran Church of Fort Worth, the American Diabetes Association or to a charity of choice, in Gordon’s memory, is suggested.

To order memorial trees or send flowers to the family in memory of GORDON FREDERICK SAGEBIEL, please visit our flower store.