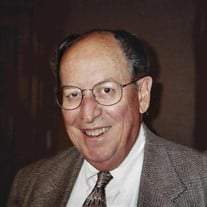 Fort Worth, Texas -- Gurvis Jefferson “G.J.” Post Jr., passed away peacefully Friday evening, July 23. Mr. Post was 90. Service: 10 a.m. Friday in the Chapel of the Good Shepherd at University Christian Church, 2720 S. University Drive. Entombment will follow in the Mausoleum at Greenwood Memorial Park. Family and friends will be received from 5 to 7 p.m. Thursday in the Great Room at Robertson Mueller Harper. A native Fort Worthian, G.J. was born at All Saints Hospital, the son of Gurvis and Marie Orr Post. He lived in Fort Worth for most of his life, attending Lily B. Clayton Elementary and McLean Jr. High schools before moving to Marion, Louisiana for high school. He graduated from Marion High School in 1948 and Louisiana State University in 1953. After completing university, he entered the Army on an ROTC Commission and served 2 years active duty and 12 years in Reserve before retiring as Captain. While serving at Fort Hood, his cousin, Nancy Cotharn, introduced him to Joann Vanwinkle, who was her roommate at Baylor Nursing School in Waco. Following his tour with the Army, G.J. moved back to Fort Worth where he and Joann were married in 1957. G.J. worked in the family business, G.J. Post Motor Company, for several years and was also involved in other business interests including real estate manager, mortgage broker, and fire and casualty insurance. He also worked briefly with the Fort Worth Chamber of Commerce. In 1968, G.J. began a nearly 40-year career as a stockbroker. He worked for several major brokerage firms and served as branch office manager for several years. He is a Past President of the Fort Worth Security Dealers Association. He was also an original organizer, principal stockholder, and board member for the Keller State Bank. G.J.’s was a life dedicated to volunteerism throughout the Fort Worth community with a major emphasis on groups that served youth. He was a youth baseball and softball coach for 22 years and served as President of the Blue Raider Athletic Association. He served on the Golden Gloves tournament staff for 27 years including the 1971 National Tournament. He was actively involved with the Miss Texas Pageant for 50 years including as pageant director from 1963 to 1966. He was a certified judge for Miss America state pageants and travelled extensively across the country to judge Miss America state pageants. He is a member of the Miss Texas Pageant Hall of Honor and is a recipient of the Miss America Organization Volunteerism Award. He has been active in, and in many cases served on the Board of, the following organizations: Ft. Worth Jaycees (Jaycee of the Year in 1963), Texas Jaycees, Kiwanis Club (Order of Merit recipient), United Way, Junior Achievement, Fellowship of Christian Athletes, Southwest Family YMCA, Metro YMCA (YMCA Chi Rho Award recipient), and a long-time proud member of the TCU Frog Club. G.J. was a member of the Pride of the Plaid at Colonial Country Club. He was a long-time member of the club and volunteered at its PGA golf tournament for over 50 years. He served on the tournament committee for many years including for the first Tournament Players Championship in 1975. He also served on the tournament committee for the 1991 U.S. Women’s Open Championship. In later years he greatly enjoyed his daily noon bridge game at the Fort Worth Club and many regular gin games at Colonial. We have lost our beloved husband, father, grandfather, and great-grandfather. Fort Worth has lost a long-time passionate volunteer and supporter. He will be greatly missed by his family and many friends. He was preceded in death by his parents and first wife, Joann, who died in June 1994. In addition to his wife of 25 years, Mary Beth Post, G.J. is survived by his children, Gary Post and his wife, Sarah of Ft. Worth, Jeff Post and his wife, Karen McClure of Houston, Phil Post and his wife, Melanie of Burleson, Patti Lyons of Ft. Worth, Zach Taylor of Granbury, and Morgan Finley and her husband Marcus of Keller; ten grandchildren and eight great-grandchildren. To send flowers or a memorial gift to the family of Mr. GURVIS JEFFERSON "G.J." POST Jr. please visit our Sympathy Store.
To order memorial trees or send flowers to the family in memory of Mr. GURVIS JEFFERSON "G.J." POST Jr., please visit our flower store.