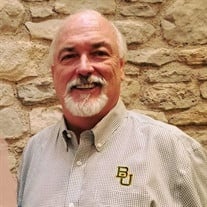 FORT WORTH -- Guy Mitchell McCollum went to be with our Lord unexpectedly Monday morning, February 12, 2018. Mr. McCollum was 64. SERVICE: A celebration of his life will be held 11 a.m. Monday in the sanctuary of the First United Methodist Church of Fort Worth, 800 W Fifth Street, with reception immediately following in the church's Wesley Hall. He will be laid to rest in Greenwood Memorial Park. Family and friends will gather from 2 to 4 p.m. Sunday in the Great Room at Robertson Mueller Harper. MEMORIALS: In lieu of flowers, consideration of contributions to the First United Methodist Church of Fort Worth, the Boy Scouts of America or a charity of your choice, in his memory, is suggested. Born in St. Louis, Missouri on December 29, 1953, Guy was the son of Robert Miles and Marion Frances Silhavy McCollum. He moved with his family to the Wedgewood area of Fort Worth in 1966, and attended Wedgewood Junior High and graduated from Southwest High School in 1972 where he was a football and track athlete. He received a degree in business from the Hankamer School of Business at Baylor University in 1976. Guy was a member of the Baylor Alumni Association as well as the Baylor Foundation. Gig’em Bears! Guy’s grandfather, Ralph McCollum, was a professional Boy Scout and raised both Guy and his brother, Scot, in the scouting program. He was awarded the rank of Eagle Scout and the Order of the Arrow. He continued in that tradition by serving on the Boy Scouts of America’s Longhorn Council Executive Board. He worked in real estate and appraisal and property tax assessment creating McCollum Consulting for over 40 years. The company merged with other companies in 2017 to become Quatro Tax LLC. While Guy worked hard, he also played hard. To call Guy a large personality would be an understatement. Where there was a celebration, party or an event, he was there. If there wasn’t, he would plan one. From Halloween costume to Baylor football watching parties, everyone wanted to be at Guy’s event; he was that much fun. Guy’s love for all things boating began at an early age, influenced by his parent’s best friend, “Jack” Boyd. He actually learned to water ski very early at six years old. All things boating turned into a true passion that lead him all over the country with various boating clubs, including the Antique Classic Boat Society. His classic red Century ski boat and other restored wooden boats earned multiple awards throughout the years. From early childhood through adulthood, Guy could be found on Eagle Mountain Lake, Grand Lake in Oklahoma and Beaver Lake in Arkansas or more recently sailing the oceans. God has been working in his life making him gratefully aware of the wonderfully awesome affect Christ has on a life. His children were his heart and his eyes always sparkled when he spoke of them. He will be missed by his family and all who knew him. He was preceded in death by his father. SURVIVORS: In addition to his wife, Jacque Gober McCollum, Guy is survived by his children Jackson Robert McCollum and Rachel Zendig and her husband, Michael; his mother, Marion; brother, Scot McCollum and his wife, BK; sister, Roberta Birtchet and her husband, Mike. He is also survived by his nieces and nephews, Melanie McDonald, Stefanie Colson, Chelle Rose, Miles McCollum, Josh McCollum, and Lauryn Bone; and a host of other relatives and friends far and wide. To send flowers or a memorial gift to the family of Mr. GUY MITCHELL McCOLLUM please visit our Sympathy Store.
To order memorial trees or send flowers to the family in memory of Mr. GUY MITCHELL McCOLLUM, please visit our flower store.