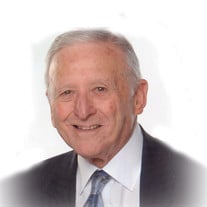 FORT WORTH -- Harold Abraham Klotz passed away peacefully Thursday, March 2, 2017. Mr. Klotz was 91 years old. Service: 11:30 a.m. Monday in the sanctuary of Beth-El Congregation, 4900 Briarhaven Road, with Ralph Mecklenburger, Rabbi Emeritus, officiating. Following committal prayers, he will be laid to rest, next to his wife, Mimi, in the Beth-El section of Greenwood Memorial Park. Bearers of his casket will be David Shaw, David Bronstein, Neil Bronstein, Dale Bronstein, Barry Sonkin, Melvin Schwartz, Howard Sonkin and Larry Harris. Minyan will be held at the Klotz residence on Monday beginning at 6:00 p.m. Memorials: in lieu of flowers consideration of contributions to Beth El Congregation or the Leukemia & Lymphoma Society of Fort Worth, in his memory, is suggested. Born in Napoleonville, La. on Jan. 24, 1926, Hal was the son of Maurice and Lena Friedlander Klotz. After the death of his father, his mother, sister and he moved to Tyler; he was 2 years old. Hal graduated from John Tyler High School in 1942 and attended The University of Texas at Austin, where he played the coronet in the Show Band of the Southwest. In 1944, he joined the United States Navy and served in the Pacific Theater. After serving his country he returned to college. In 1952, Hal re-enlisted and fought in the Korean Conflict. In 1960, he met the love of his life, Mimi Bronstein. After a four month courtship, they married and enjoyed 55 beautiful years together. Hal was an agent for Prudential Life Insurance, for 33 years. He was an avid golfer, bowler and loyal fan to the Dallas Cowboys, Dallas Mavericks and the Texas Rangers; he also loved a good poker game. Hal was a loving husband, father, grandfather, uncle and friend to many and will be greatly missed. The family would like to thank the caregivers at Stonegate Nursing & Rehabilitation Center and Dr. David Barrera and his staff. Survivors: In addition to his children, Alan Klotz and wife, Gretchen, Marcy Klotz Phillips and husband, Greg, Steven Klotz and Rick Klotz, Hal is survived by his granddaughters, Lauren and Natalie Phillips; many nieces and nephews and their families; and his dog, Precious. To send flowers or a memorial gift to the family of Mr. HAROLD ABRAHAM "Hal" KLOTZ please visit our Sympathy Store.
To order memorial trees or send flowers to the family in memory of Mr. HAROLD ABRAHAM "Hal" KLOTZ, please visit our flower store.