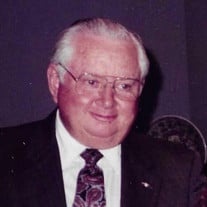 Fort Worth, Texas – Harold B. Sharpe passed away Wednesday evening, February 16. He was 93. Following a Service at the Grave at 1 pm Monday, February 28, in Greenwood Memorial Park, he will be laid to rest next to his wife, Patsy, who died in 1991. Born in San Angelo, Harold was the son of James Harold and Esther Ruth Jackson Sharpe. After moving to Fort Worth, he attended Arlington Heights High School, Kemper Military School and Texas Technological College, now Texas Tech University. Harold served in the U. S. Air Force and AF Reserves from 1950 to 1956, discharged as a Captain. After working 40 years, he retired in 1992 from Harold Sharpe Independent Insurance Agency. Harold was a Master Mason of 60+ years and was a member of Moslah Shrine and its Patrol Unit and was in the Royal Order of Jesters, Court #32. He loved to hunt, fish and BBQ and be surrounded by his family. Harold was so loved by his family for his huge heart, kindness, generosity and fairness. In addition to his children, Peggy Sharpe Lathan King and her husband, Dean, and Matthew G. Sharpe and his wife, Brenda, Harold is survived by grandsons, Ryan S. Lathan and Garrett A. Lathan and his wife, Sara. He was their beloved “Pop” and their father-figure their whole lives. He is also survived by grandsons, Michael D. King and his wife, Vickie, and Robbie King and his wife, Lyndzi; and his great-grandchildren, Wren Lathan, Joni Lathan, Kathleen King, Robbie King and Ryder King. Memorials: In lieu of flowers, consideration of contributions to the Shriners International Hospital for Children or to the Wounded Warriors Project, in his memory, is suggested.

To order memorial trees or send flowers to the family in memory of HAROLD BERT SHARPE, please visit our flower store.