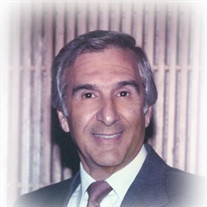 fORT WORTH -- Harry Simon Kahn passed away Monday afternoon, Oct. 2, 2017, after a 15-month battle with cancer. Mr. Kahn was 89. Service: 1 p.m. on Sunday in the Barnett Sanctuary at Congregation Ahavath Sholom, 4050 S. Hulen Street, with Rabbi Andrew Bloom and Cantor Shoshana Abrams Kaikov officiating. Following committal prayers, he will be laid to rest next to his wife, Doris, in Ahavath Sholom Cemetery. Bearers of his casket will be his grandsons, Scott Kaesler, Jason Kahn, Blake Webster and Brandon Webster. Shiva will be held at the home of Stephanie and Todd Webster with minyan service beginning at 6 p.m. Sunday. Memorials: The family respectfully requests that no flowers be sent. However, those desiring, please make memorial contributions, in Harry’s name, to the American Cancer Society, B’nai B’rith International, or to the General Fund at Congregation Ahavath Sholom. Born Nov. 23, 1927 in Münstermaifeld, Germany, Harry was the son of Leo and Frieda Marx Kahn. Two months after Kristallnacht in November 1938, Harry and his family escaped Nazi Germany by immigrating to the United States. They settled in Chicago where Harry graduated from Tilden Technical High School. He then joined the U. S. Army, stationed in Colorado Springs. After discharge from the service, he attended Chicago Technical College. He married Doris Silver in Jan. 29, 1950 and began a 45-year career in the meat packing industry. This eventually led the family to Indianapolis and then to settle in Fort Worth in 1966. A leader in the meat packing industry, Harry served as an advisor to other countries wanting to start packinghouses. He and Doris enjoyed travelling to Poland, Russia, and South America, among other places. Harry’s true love was helping people and he was actively involved in several civic and community organizations. He was president of Congregation Ahavath Sholom twice and president of B'nai B'rith. An excellent cook, for many years he was in charge of preparing holiday meals to serve to the Jewish senior citizens. Twice selected Man of the Year for B'nai B'rith, Harry had great devotion to making sure the Jewish community of Fort Worth remained alive and thriving. The family wishes to thank Texas Oncology, Diana Pryor, RN of Solaris Healthcare, caregivers Etta Kennard and Cheryl McKnight, and the exceptional staff of Clear Fork Assisted Living and Memory Care. He was preceded in death by his parent and wife. Survivors: In addition to his three children, Cari Kahn and Stuart Vexler, Stephanie Kahn Webster and Todd, and Alan Kahn and Selina, Harry was grandfather of nine and great-grandfather of three; and is survived by his sister, Annie Kahn of Chicago, Ill.; and many dear relatives and friends. To send flowers or a memorial gift to the family of Mr. HARRY SIMON KAHN please visit our Sympathy Store.
To order memorial trees or send flowers to the family in memory of Mr. HARRY SIMON KAHN, please visit our flower store.