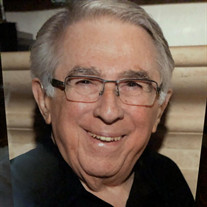 Harvey Anton, 92, passed away peacefully on Tuesday, September 3, 2019 at his home in Dallas. A native and longtime resident of Fort Worth, Harvey was a graduate of R.L. Paschal High School where he played the trumpet in the High School band. In 1942 he attended an accelerated program in mechanical engineering at Texas A & M college before enlisting in the US Navy six months later. Harvey was honorably discharged in 1949 out of Seattle, WA. From 1949-1952 he worked while attending Arlington State College (UT Arlington) studying industrial and electrical engineering. During that time, he was inducted into the Engineering Society in which he was elected President. Harvey married Sophie Blinderman on April 20, 1952 at the Texas Hotel in Fort Worth. A devoted and loving family man, he and his bride were married and inseparable for 49 years and raised two children, Lowell Paul Anton, who died in 1985, and Gail Elaine Anton Mizrahi. Working from a very young age, Harvey ultimately opened up his own men’s shoe store, Harvey’s Shoes, on West Berry Street across from Paschal High School from 1970-1985. A man of many talents, Harvey enjoyed playing golf and began calligraphy lessons in the 1970’s, developing his unique skill. He taught calligraphy at several Fort Worth schools, predominately at TCJC, for over ten years, developing quite a reputation within this artistic arena. His calligraphy was on hundreds of invitations, certificates and awards for individuals as well as commercial accounts with Tandy Corporation, TCU, the Kimbell Art Museum and Fort Worth ISD. In 1984, the International Association of Master Penman and Teacher of Hand Writing asked him to lead a calligraphy workshop in Rochester, NY. Harvey was a member of the Calligraphy Guild in Fort Worth, Dallas, and the Japan Calligraphy Society. Harvey moved to the Dallas area in 2004, becoming the second resident of The Villages of Prestonwood where he wrote the monthly newsletter. In 2017 he moved to The Reserve of North Dallas, also becoming an active member in that retirement community. Harvey was a lifetime member of B’nai Brith and the Hebrew Loan Association. He became a 50 Year Life Member of the Moslah Shriners International, the Scottish Rite of Freemasonry, and the Grand Lodge of Texas Master Masons. Harvey will be remembered as a kind, soft-spoken gentleman, husband, father, grandfather and uncle. He was preceded in death by his parents, Sam and Lillian Berg Anton; wife, Sophie Blinderman Anton; son, Lowell Paul Anton. siblings, Ida Anton Stine, Charles Anton, Reuben Anton, Rebecca Anton Carter, Abe Anton, Bessie Anton Levinson, Max Anton, and Margaret Anton Leva. Survivors are daughter and son-in-law, Gail and Roland Mizrahi of Dallas; grandson, Lane and Katerina Mizrahi of Frisco; and granddaughter, Melanie Mizrahi of San Antonio, among many nieces and nephews. To send flowers or a memorial gift to the family of Mr. HARVEY ANTON please visit our Sympathy Store.
To order memorial trees or send flowers to the family in memory of Mr. HARVEY ANTON, please visit our flower store.
Send a Sympathy Card