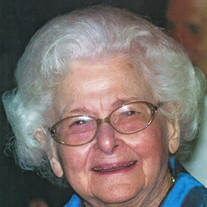 FORT WORTH -- Hunter Marie Quarles Yanaway passed away peacefully Sunday morning, Nov. 6, 2016. Mrs. Yanaway was 103. Service: A celebration of Hunter's life will be held at 3 p.m. Monday in the chapel at Robertson Mueller Harper; her family will receive friends prior to the service. She was laid to rest privately next to her husband, Bob, in Shannon Rose Hill Memorial Park. Memorials: In lieu of flowers, consideration of contributions to the North Central Academy at Happy Hill Farm or to the Shriner's Hospitals for Children, in her memory, is suggested. Born March 5, 1913, in Elkhart, Hunter Marie was the only child of Hunter and Lucy Woodard Quarles. At an early age, the family moved to San Angelo. Hunter graduated from high school during the depression before the family moved to Waco where she attended business school. Hunter came to Fort Worth in 1938 where she held several jobs before working for Standard Oil and Gas Company, now AMOCO. In 1945, she met Robert Brooks Yanaway who was the love of her life. They married Dec. 16, 1948, and moved to Houston where Bob's job took them, but returned to Fort Worth in 1952 where they remained the rest of their lives, working and raising their two sons. In 1962, Hunter went to work at the Fort Worth Public Library and retired in 1976. A devoted wife and mother, she was active in the PTA, was a Cub Scout den mother and followed her sons in Little League baseball. Fishing was her passion and she and Bob spent many happy hours traveling to fishing camps. Their last fishing adventure took them to Canada in 1999. Mrs. Yanaway was a member of Meadowbrook United Methodist Church since 1957. She was a member of the Woman's Club of Fort Worth and the Women of Rotary, serving as president from 1984 to 1985. She was preceded in death by her parents; husband; and son, James Hunter Yanaway. Survivors: In addition to her son and his wife, Bill and Diane, Hunter is survived by her granddaughter, Kerri Cooper; grandson and his wife, Justin and Lindsay Yanaway; great-granddaughters, Hunter Grace and Hampton Elizabeth Yanaway; step-daughter, Vicki Orr of Florida and her children, Victoria, Robert, Tommy and Jenny. To send flowers or a memorial gift to the family of Mrs. HUNTER MARIE QUARLES YANAWAY please visit our Sympathy Store.
To order memorial trees or send flowers to the family in memory of Mrs. HUNTER MARIE QUARLES YANAWAY, please visit our flower store.