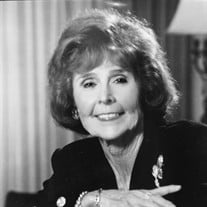 Irma Gene Cooper passed away at her home, surrounded by loving family, on May 18, 2020. Irma Gene was born to Eugene Paul Wilson and Irma Mae Sibley Wilson on March 19, 1929 in Fort Worth, Texas, where she also cherished time spent with her grandmother, Mary Myrtle Sibley. Irma Gene attended Polytechnic High School. She was widowed at 19 when her husband, Norman Coleman, was killed. Irma Gene earned both her Bachelor of Science Degree and Master of Science Degree at Texas Christian University. At TCU, Irma Gene was a member of the TCU Band as a flag twirler, where she especially enjoyed train trips to out-of-town games. In 1952, Irma Gene married Byron Edward “Eddie” Cooper. Irma Gene & Eddie raised three children, Gary Edward Cooper; Cristy Cooper Williamson; and Paul Byron Cooper, and adored their only granddaughter, Whitney Gene Williamson. Widowed again after 42 years, in William J. Kellenberger, she found a dear companion. Irma Gene and Eddie welcomed their children’s friends into their home and ranch house, often gathering places for outdoor adventures, horseback riding, dancing, school activities and friendship. Irma Gene and Eddie loved to host parties with their friends; celebrating everything from Christmas, to Mardi Gras, to a local Rattle Snake Celebration & Bar-B-Que, a tradition Irma Gene continued by hosting parties through her later years. Irma Gene, or “I.G.” as her friends called her, led a life of learning, teaching and service. She taught Biology for over twenty years. I.G. volunteered as a docent at the Amon Carter Museum for over two decades. At All Saints Episcopal Hospital, Irma Gene volunteered in Surgical Recovery for almost thirty years, and was President of the Hospital Auxiliary. Irma Gene’s community service included membership at University Christian Church, where she served on Chancel Guild and was active in her Sunday School class. Irma Gene was a member of Jr. Woman’s Club and The Woman’s Club; a charter member of Muarda, a member of Bon Soir and President of Aquarius. Irma Gene remained active with TCU, as a dedicated football and basketball fan. She was a member of TCU’s Quinq 50 Year–Alumni Club, Golden Frogs, and a president of TCU Women’s Exes. I.G. followed her own star in friendship and in style. She never accepted traditional constructs, even while being a loving wife and supportive mother. She personified self-starting initiative and a strong work ethic. A petite woman, she was up to any physical challenge. Her interests included ballroom dancing, beekeeping, international travel, natural conservation, tournament bridge, water skiing, American art, and competitive distance running. Irma Gene will rest in state at Robinson Mueller Harper Funeral Home on Monday, May 25. After private services elsewhere, Irma Gene will be interred on Tuesday May 26 at Greenwood Cemetery. Her family will schedule a life celebration at a later date. Donations in her memory may be made to Shriners’ Hospitals for Children. To send flowers or a memorial gift to the family of Mrs. IRMA GENE WILSON COOPER please visit our Sympathy Store.
To order memorial trees or send flowers to the family in memory of Mrs. IRMA GENE WILSON COOPER, please visit our flower store.