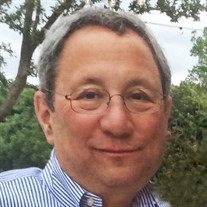 FORT WORTH --Irwin Harold Blum passed away Saturday morning, February 4, 2017, after a two-week battle with pancreatic cancer. Mr. Blum was 65. Service: 2 p.m. Tuesday in the Barnett Sanctuary at Congregation Ahavath Sholom, 4050 S. Hulen Street. Rabbis Andrew Bloom and Leonard Oberstein and Cantor Shoshana Abrams Kaikov will officiate. Following committal prayers, Irwin will be laid to rest in Ahavath Sholom Cemetery. Shiva and minyan services will be held at the home of Marvin and Laurie Blum, beginning at 6 p.m. Tuesday. Memorials: In lieu of flowers, consideration of contributions to the Congregation Ahavath Sholom Catering Fund or Make-A-Wish North Texas, 3509 Hulen Street, Suite 200, Fort Worth, Texas, 76107, in his memory, is suggested. Born Sept. 5, 1951, in Fort Worth, Irwin was the son of Julius and Elsie Oberstein Blum. After graduating from R. L. Paschal High School, at age 17, he delayed his entry into the University of Texas at Austin to single-handedly run the family business for six months as his father recovered from a heart attack. He then started college in January 1970, and graduated with a Bachelors of Business Administration in May 1973. While at UT, his main activities were being a member of Sigma Alpha Mu fraternity and the Silver Spurs men's service organization. Soon after graduating from college, Irwin joined his parents in J. Blum Co, Inc., a distributor of meat packing supplies. In June 1979, Irwin married LeaAnn Spiegel in Dallas; they had a wonderful marriage for over 37 years. Together, they raised their two sons, Benjamin and Matthew. Irwin was a supremely devoted husband, father, son and brother. He was first and foremost a family man. His family always came first and he did everything in his power to lovingly provide for them. Throughout his adult life, Irwin was active in the Fort Worth Jewish community, including serving on the boards of Congregation Ahavath Sholom and the Jewish Federation of Fort Worth and Tarrant County. He was a wish-granter for the North Texas chapter of Make-A-Wish Foundation and served meals at the Union Gospel Mission. Irwin's favorite social activity was joining with friends at Yogi’s for their weekend breakfast club; the conversation was always lively. He was genuine to the core and a rock-solid friend who naturally drew people to him. During the last two weeks of his life, Irwin received an outpouring of love from dozens of friends, from grade school, college, the business world, and the Fort Worth community. The adjective used most often to describe the essence of Irwin’s personality is “selfless” – a man who quietly gave everything of himself to others and wanted nothing in return. He was preceded in death by his father. Survivors: In addition to his wife and sons, Irwin is survived by his mother; brother and his wife, Marvin and Laurie Blum; brother-in-law and his wife, Mark and Makda Spiegel; niece and her husband, Elizabeth Blum Savetsky and Ira; and nephews Adam Blum and Matthew Spiegel. To send flowers or a memorial gift to the family of Mr. IRWIN HAROLD BLUM please visit our Sympathy Store.
To order memorial trees or send flowers to the family in memory of Mr. IRWIN HAROLD BLUM, please visit our flower store.