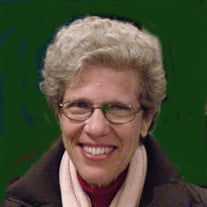 Jacqueline (Jackie) Bzostek was a beloved wife, mother, grandmother, educator, and member of the Fort Worth Jewish community. She was born on February 3, 1946, in Brooklyn, New York. Her father, who was a World War I veteran, was born in Russia, and her mother was born in England while her family was in the process of immigrating from Russia. Jackie grew up in Brooklyn, NY and attended Brooklyn College, where she met her beloved and best friend Barry. After marrying, Jackie and Barry moved to Syracuse for Barry to attend medical school. While there, Jackie taught middle school science--and she loved teaching middle schoolers--and attended night school to earn a Master’s Degree in Secondary Science Education. After medical school, Jackie and Barry moved to the Bronx for his pediatrics residency, where she continued to teach until the birth of her first child, Andy. After Barry’s residency, the family moved to Key West, Florida where he was a naval pediatrician. Key West became a spiritual home for Barry and Jackie, and they returned there many times over the course of their lives. Their second child, Rachel, was born in Key West; her middle name means palm tree in Hebrew. After leaving the Navy, Jackie and Barry moved to Fort Worth, Texas, where they had their final child, Sharon, and lived for the remainder of their lives. Jackie was always passionate about and engaged with many social justice-related issues, including public education, sexuality education and public health, and efforts to build multicultural and interfaith relationships and communities. As her children went through the Fort Worth public schools, she was a strong advocate for Montessori programs and was actively involved in efforts at both the school and district level. Over time, she also became involved in many efforts outside the school system centered on other facets of education. When she decided to re-enter the paid workforce, she found a home at Planned Parenthood of North Texas, focusing on education efforts including general sexuality with youth in various settings, programming focused specifically on HIV/AIDS education, and toward the end of her tenure at Planned Parenthood, internal staff training. Many people throughout Tarrant County came to know Jackie as “The Condom Lady.” Her work with HIV/AIDS education helped her build ties within a new community, which culminated with her serving on the HIV Planning Commission as well as leading her to work with the NAMES Project and the Ryan White Foundation. She was also deeply engaged with the Fort Worth Human Rights Commission, the National Association of Christians and Jews, and the Multi-Cultural Alliance. Jackie found a Judaic home at Beth-El Congregation in Fort Worth. Active members for over 35 years, Jackie and Barry were involved in all facets of congregational life. She served enthusiastically on many congregational committees including the Board of Directors, the Worship and Ritual Committee and as Past Chair of the Religious School and Education Committee. Through the years, Jackie loved spending time at Greene Family Camp during the summers. When she wasn’t at Greene, she could often be spotted with her children at the Dan Danziger Jewish Community Center pool. Over the years, Jackie built an eclectic collection of loves. She and Barry shared a deep appreciation of the Fort Worth music and art community and were supporters of the Fort Worth Symphony from its inception. Together they loved to travel across the world, and were able to fulfill lifelong dreams, including seeing the Northern Lights in Norway. Jackie loved organizing and decorating for celebrations. Whether it was preparing for her family’s life-cycle events (including decorating overalls for birthdays), welcoming out-of-town guests, or even preparing for a Beth-El Primetimers program, she often lived the motto “anything worth doing is worth doing to excess.” For many years, Jackie was an avid bowler, using her personalized bowling ball in the B’nai B’rith bowling league. Though her time living in Key West was short, it left a lasting imprint. Jimmy Buffet, hand-thrown ceramics, sandals (especially Birkenstocks), and the ocean held special places in her heart. Jackie loved game shows and wordplay, and you could often find her watching Wheel-of-Fortune, and (in more recent years) splitting her time among numerous games of Words with Friends. Jackie’s family was, above everything, the most important part of her life. Over the years, this grew to include partners to her three kids, Julie with Andy, Archie with Rachel, and Mike with Sharon. Her four granddaughters (Lia, Ryen, Lucy, and Meredith) brought her much joy and happiness, and she loved being able to watch them grow into their teenage years. Ryen and Lucy came by themselves to Fort Worth to “Amma Camp” for a week one summer and it was one of the highlights of her time as a grandmother. Jackie left a lasting impact on everyone who met her--from elementary school classmates of her children to fellow members of the Jewish community, to the broader Fort Worth community. She will be missed. A service was held at Beth-El Congregation on Monday, January 17, with Rabbis Brian Zimmerman and Ralph Mecklenburger officiating. Following committal prayers, she was laid to rest next to Barry in the Beth-El Section of Greenwood Memorial Park. To send flowers or a memorial gift to the family of Mrs. JACQUELINE EDITH BELLOWS BZOSTEK please visit our Sympathy Store.
To order memorial trees or send flowers to the family in memory of JACQUELINE EDITH "Jackie" BELLOWS BZOSTEK, please visit our flower store.
Send a Sympathy Card