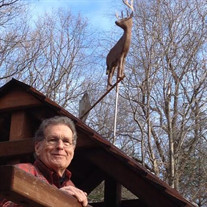 FORT WORTH -- James Walker Clark, Jr. died peacefully Monday, January 13, 2020, from Alzheimer’s disease. Mr. Clark was 81. SERVICE: A celebration of Jim’s life will be held at 11 a.m. Saturday in the sanctuary of University Christian Church, 2720 S. University Drive, with a reception to follow in the church’s Gallery Area. Burial will be held later at the United States Air Force Academy in Colorado Springs, Colorado. MEMORIALS: In lieu of flowers, consideration of contributions to the Amon Carter Museum of American Art, 3501 Camp Bowie, Fort Worth, Texas 76107, or to the charity of choice, in his memory, is suggested. Jim was born on April 12, 1938, in San Jose, California. His father served in the U. S. Air Force and the family lived on Air Force bases most of time Jim was growing up. He loved the various airplanes and learned as much as possible about everything involved with flying. He also learned to express his creativity and love of art. He graduated in the second graduating class of 1960 at the United States Air Force Academy, earning a Bachelor of Science degree. He earned a Master of Science in Aeronautical Engineering degree from the Air Force Institute of Technology and retired from the Air Force as a Major in 1980. As a fighter/interceptor pilot, Jim flew F-102s, F-106s, and served a tour in Vietnam as a Forward Air Controller. Jim’s early creative artwork later turned to wood carving, creating weathervanes, and small decorative items in the style of early American folk artists. Seeing artwork as problem solving, Jim honed a recognizable style of his own. His artistic creations were honored with awards and recognition. Many members of the Folk Art Society of America acquired Jim’s creations for their individual collections. Jim served as a docent at the Amon Carter Museum of American Art. His retirement was filled with creating and teaching about art, and traveling to see art in churches and museums. Jim was a man of faith with a high standard of morals and ethics, creative yet analytical, and proud of his service to his country. He also showed a wry, sly sense of humor and was a good neighbor. Serving the church in many ways, studying the Bible, and striving to live as a Christian remained a constant throughout his life. He was preceded in death by his parents, Col. James W. and Margaret Grainger Clark. SURVIVORS: In addition to his wife, Jean Walbridge, Jim is survived by a son, James Brigham Clark and his wife, Sandra, of New York City and their children, Jimmy and Anna Clark; a daughter, Rachel Ayres Clark and her companion, Hans Lischka, of New Orleans; a sister, Margaret “Midge; Antonopulos and her husband, Glenn, of Fort Collins, Colorado; and three nieces. To send flowers or a memorial gift to the family of Mr. JAMES WALKER CLARK Jr. please visit our Sympathy Store.
To order memorial trees or send flowers to the family in memory of Mr. JAMES WALKER CLARK Jr., please visit our flower store.
Send a Sympathy Card