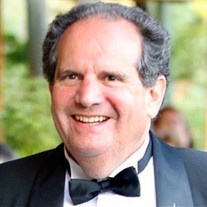 LUBBOCK – James Jay Herman, M.D., passed away Monday morning, July 10, 2017. Dr. Herman was 69. Service: 11 a.m. Friday in the Kornbleet Memorial Cemetery Chapel, located in Ahavath Sholom Cemetery, 411 N. University Drive, Fort Worth. Cantor Shoshana Abrams Kaikov will officiate. Following committal prayers, he will be laid to rest in the cemetery. Memorials: In lieu of flowers, consideration of contributions to the Texas Allergy, Asthma and Immunology Society (TAAIS) Memorial Foundation: For the annual Asthma Scholarship, PO Box 300475 Austin, TX 78703 (www.taais.org), in his memory, is suggested. Born in Fort Worth on Nov. 28, 1947, he was the son of Paul F. “Fishy” and Helen Levy Herman. Known by his friends and family as “Jimmy” and “JJ” and by his grandchildren as “Pops,” he would move mountains for those he loved, and was rare to decline an opportunity to help others. Jimmy could be found on the golf course most weekends. After graduating from R.L. Pascal High School in Fort Worth, Jimmy received a B.S. with honors from the University of Texas in 1970 followed by a M.D. from the University of Texas Medical Branch at Galveston. He completed his residency and fellowship at Northwestern and Harvard Medical School, respectively. Jimmy passionately pursued his career for the next 39 years, and loyally cared for each patient who entered his office and life. Throughout many of his practice years, he taught as an assistant professor at each alma mater as well as Baylor College of Medicine; he devoted time to serving on numerous professional committees and boards in his field. He was preceded in death by his parents, infant son, Coheleth, and his wife, Barbara Herman. Survivors: In addition to his children, Hugh Herman and his wife, Kristi, and Elana Herman Evans and her husband, Greg, Jimmy is survived by his step-daughters, Jamie Pierce and her fiance, Mike Florit, Susan Henthorn, Diane Dailey and her husband, David, and Rebecca Ward and her husband, Brandon; Pops was adored by grandchildren, Henry and Amelia Evans, William and Weston Henthorn, Caleb and Benjamin Dailey and Grayson and Harlan Florit; and brother, Mike Herman and his wife, Jenny, and their family. To send flowers or a memorial gift to the family of JAMES JAY HERMAN M.D. please visit our Sympathy Store.
To order memorial trees or send flowers to the family in memory of JAMES JAY HERMAN M.D., please visit our flower store.