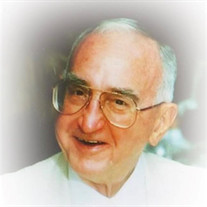 FORT WORTH -- James Franklin Pattee passed away peacefully Tuesday morning, May 9, 2017, in Fort Worth. Mr. Pattee was 95. Services: A service at the grave will be held at 10 a.m. Saturday, May 13, in Mt. Evergreen Cemetery, Pecos. A memorial service will be held at 2 p.m. Friday, May 19, in the Longhorn Room at Trinity Terrace, 1600 Texas Street, Fort Worth. Memorials: In lieu of flowers, consideration of contributions to your charity of choice, in his memory, is suggested. Born in Yankton, South Dakota on May 1, 1922, “Pattee,” as he was called by family and friends, was the son of Dr. James Milo and Edith Christie Pattee. He grew up in Dallas and graduated from Woodrow Wilson High School where he was part of the 1933 Woodrow Wilson State Championship Basketball team which led him to attend Texas Christian University in Fort Worth on a basketball scholarship. It was at TCU that he met his wife of 48 years, Margaret Lee Corbett. He graduated in 1943 with a degree in accounting. Even though Pattee was drafted into the U. S. Army and shipped overseas to fight in WWII, he couldn’t stay away from his sweet and charming Margaret Lee. On May 20, 1944, he came back to Texas on leave and married his beloved. The visit was short-lived and he went back to the front, even unable to return for the birth of his son, James F. Pattee Jr. on Feb. 15, 1945. In 1946, he finally returned home for good after seeing action on the fringes of the Battle of the Bulge, and earning the Bronze Star during his time in the Army. On May 1, 1947, his daughter Rinda Lee Pattee was born. The family lived in Fort Worth, where Pattee was with the Internal Revenue Service. In 1950, they moved to Pecos where he opened his own CPA practice. He spent the next 60 years in Pecos where he raised his children, forged many wonderful friendships, and served the community in many ways. He and his family merged quickly into the social and business scene there. He was an active member of the Rotary Club, becoming president and receiving the Paul Harris Fellow recognition as well as, serving as a church elder for the Presbyterian Church. He continued his CPA practice into his late eighties, earning many accolades along the way. He loved Pecos and Pecos loved him. Even while spending the last six years in Fort Worth living at Trinity Terrace Retirement Community, his heart was always in Pecos. Pattee enjoyed any time spent with his family and friends. He was an avid outdoorsman, who enjoyed fishing in Canada, dove hunting in Mexico, and deer hunting at his second home in Fort Davis, TX. He also loved traveling all over the world with his wife Margaret, including two trips to the Olympics. He took his granddaughters on yearly trips, traveling to Alaska, New York, and Seattle, as well as places closer to home. He took pleasure in attending his children’s, grandchildren’s, and great-grandchildren’s activities and sporting events. Even in recent years, he loved attending his great-grandson’s baseball games when he could, and playing on the floor with his great-granddaughter. Pattee lived a full life and will be missed by all of those he met along the way. It was truly a pleasure and a joy to be a part of his life. Survivors: In addition to his children, Jim and Rinda and her husband, Stan Thomas, Pattee was grandfather to Amy Woods and her husband, Brian, and Natalie Parker and her husband, Justin; and great-grandfather to Carson Lively, Avery Woods and Grace Parker. To send flowers or a memorial gift to the family of Mr. JAMES FRANKLIN PATTEE please visit our Sympathy Store.
To order memorial trees or send flowers to the family in memory of Mr. JAMES FRANKLIN PATTEE, please visit our flower store.
Send a Sympathy Card