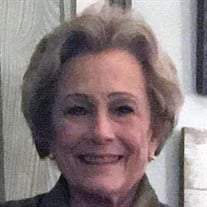 Janet Small of Fort Worth passed to Glory on Wednesday, August 11, 2021. Born June 29, 1947, in Wichita Falls, Texas, and raised in Fort Worth, Janet’s parents, Dr. David E. and Dorothy J. Small, doted on the spunky and vivacious Janet. She was baptized by Granville Walker at University Christian Church, where she became a lifelong member. In school at Bluebonnet Elementary, Janet was regularly scolded for talking and distracting the other students and keeping the teachers too occupied to teach. Discontent with just a simple first and last name, Janet routinely renamed herself Janet Louise, Janet Francis or Janet Marie, labeling her belongings and insisting her parents give her a middle name. During Janet’s early teen years as a Cardinal at McLean Middle School, Janet’s family grew to include a baby sister, Cindy Ann (who was christened with a middle name, thanks to Janet). The family accepted Janet’s love for animals, and their home was filled with dogs, cats, birds and chameleons over the years. An avid horseback rider and tennis player, Janet stayed busy with weekend competitions, including synchronized riding. At R.L. Paschal High School, Janet was a social butterfly and was honored as Junior Favorite, Senior Sweetheart, Football Sweetheart, and Most School Spirit. She served as President of the Phylades Charity Club, was named Colonial Country Club Queen, and was a member of Barnaby Club and Jr. Canwick Club. Graduating Paschal High School in 1965, Janet then attended Texas Tech University, where she was a member of the Zeta Tau Alpha sorority. After college, Janet returned to Fort Worth, working first as an American Airlines stewardess, perching a pillbox hat perfectly on top of her bouffant. She spent more than a decade working as an Executive Secretary for Charles Tandy until his death in 1978. The two shared a love for all things Fort Worth and a sharp sense of humor. In her later years, Janet taught herself to cook and would host friends and family for meals. As a member of Junior Women’s Club, Janet served as President of the Murada Club. Settling in a home on Ann Arbor Court in the 1990s, Janet made a close circle of friends and kept a daily watch on the comings and goings of her neighbors. Her routine included several weekly stops at Yogi’s Deli & Grill – for both the food and the gossip. Her laughter will always be remembered. She is loved and will be missed. SURVIVORS: Sister, Cindy Small Hoover and numerous sweet cousins and friends. To send flowers or a memorial gift to the family of Ms. JANET SMALL please visit our Sympathy Store.
To order memorial trees or send flowers to the family in memory of Ms. JANET SMALL, please visit our flower store.