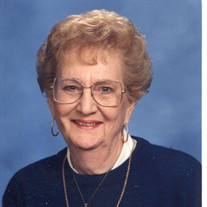 NACOGDOCHES -- Jean Justin Watts died Friday afternoon, Sept. 30, 2016. Mrs. Watts was 92. Service: 1 p.m. Thursday in the Leonard Memorial Chapel at the First United Methodist Church of Fort Worth, 800 W. Fifth Street, with a reception to follow in Wesley Hall at the church. She will be laid to rest in Laurel Land Memorial Park. Memorials: In lieu of flowers, consideration of contributions to P.E.O., 3700 Grand Ave., Des Moines, Iowa 50312, in her memory, is suggested. Born Jan. 29, 1924, in Nocona, Jean was the daughter of William Earl and Florence Amy Humphreys Justin. The Justin family moved to Fort Worth in 1925 in order to expand the markets for their family business, the Justin Boot Company, founded by H.J. Justin in Spanish Fort, Texas. Jean grew up in Fort Worth, graduated from R.L. Paschal High School and later attended Southwestern University and Southern Methodist University. She met William L Watts one summer on a blind date, and married him on Valentine's Day, February 14, 1943. She began her married life as a bride during World War II while her husband was serving his country in the U.S. Army. Following the war, Bill continued his service to his country as a career officer in the U.S. Army. Bill and Jean lived all over the world including California, Maryland, Alabama, Georgia, Bamberg and Kaiserslautern, Germany and Ohio. Jean and their children moved back to Fort Worth in 1956 while Bill was on unaccompanied assignment to Korea. After his return from Korea, Bill and Jean and their family lived in Minnesota and in Taipei, Taiwan, before retiring. Jean was always active in the Officers' wives organizations where ever they were stationed and, after Bill's retirement and subsequent move back to Fort Worth, she continued to be active in her community, holding many offices within those organizations. She was a member of the Women's Club of Fort Worth and Cadamean, Club. She was very active in PEO and served as their president. She organized tours to Hong Kong while living in Taiwan, and she was a voluntary tour director for a local tour company here in Fort Worth. She was a lifelong member of First United Methodist Church in Fort Worth. Jean loved her family and enjoyed being in their company. She organized a family cruise to the Caribbean to celebrate her birthday and loved every moment of it. She loved birthday parties and family gatherings. She bought a condo in Alto, N.M., and had many enjoyable summers with various family members who came to visit. She was preceded in death by her parents; husband, Lt. Col. William L. Watts, U. S. Army, ret.; her only son, PFC William E. "Bill" Watts, who was killed in the Vietnam War; and her sisters, Maurine Justin Wakeland and Ruth Justin Shear. Survivors: In addition to her daughters and their husbands, Sheri and Richard Stripling and Sandra "Sandy" and Lynn Ross, Jean is survived by her grandchildren, Brian Ross and Sarah, David Ross and and Kristi Stripling Mooney and Ryan; great-grandchildren, Hannah Ross, Jenna Ross, Luke Ross, Zachery Ross and Rykan Mooney; sister, Gloria Justin Hays; and several nieces and nephews and their families. To send flowers or a memorial gift to the family of Mrs. JEAN ELAINE JUSTIN WATTS please visit our Sympathy Store.
To order memorial trees or send flowers to the family in memory of Mrs. JEAN ELAINE JUSTIN WATTS, please visit our flower store.
Send a Sympathy Card