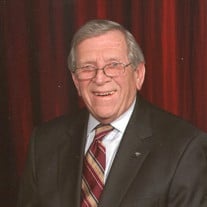 FORT WORTH -- Jeri Loftus Harper, a "Gentlemen's Gentleman," passed away Thursday morning, July 14, 2016, surrounded by his family. Mr. Harper was 74 years old. Service: 11 a.m. Tuesday in the sanctuary of the First United Methodist Church of Fort Worth. The Rev. Drs. Lamar Smith and William M. Longsworth will officiate. Following the service in the church, he will be laid to rest in Greenwood Memorial Park. Visitation: Family and friends will gather from 4 to 7 p.m. Monday in the Great Room at Robertson Mueller Harper. Bearers of his casket will be his grandchildren, Jake and Victoria Harper; and friends, Carl Capua, Hubert Jones, Jack Kell, Bob Kellow, Mike Newbill and Don Russell. Honorary bearers will be members of the Moslah Shrine Patrol and the Royal Order of Jesters, Court #32. Memorials: Consideration of contributions to the Shriner Hospitals for Children or a charity of choice, in his memory, is suggested. Born Sept. 20, 1941, in Fort Worth, Jeri was the son of Elmer C. and Mayme Loftus Harper. He graduated from R.L. Paschal High School before attending North Texas State College where he was a member of Phi Kappa Sigma fraternity. After graduating from mortuary school in San Antonio, which his brother, E.C. Jr., was instrumental in establishing, he earned his funeral director's and embalmer's licenses. Jeri returned to Fort Worth to become a partner in the family business, Robertson Mueller Harper Funeral Directors, alongside his father, brother and nephew. He was also president of Ray Crowder Funeral Home and Paramed Systems, Inc., a Fort Worth ambulance company. In addition to the family companies, he was an associate with the Lucas family of funeral homes. Jeri was active in community activities, serving as president of the Fort Worth Jaycees and the Moslah Shrine "Solid Gold" Patrol. He was Housing Chairman for Moslah Shrine Temple for their All State competitions, Director of the Royal Order of Jesters, Court #32, from whom he received the "Billy Blue Eyes" award and the Lifetime Achievement Award from Moslah Patrol. His memberships also included the Fort Worth Jaycees Past Presidents Club, the Rotary Club of Fort Worth, Julian Feild Lodge #908, A.F. & A.M., the Fort Worth Scottish Rite Bodies, and Ridglea Country Club. The entire Harper family wishes to express their appreciation to the doctors and staff at Baylor All Saints Medical Center and VITAS Hospice for the care and comfort they received. He was preceded in death by his parents; brothers, E.C. Harper Jr. and Richard Givens Harper; and niece, Becky Harper. Survivors: In addition to his wife of 20 years, Jan, Jeri is survived by his sons, Lofty Harper and his wife, Tammy, and Rick Harper and their mother, Anita; son, Ryan Harper and his wife, Ludo, and his mother, Mary Austin Johnson; grandchildren, Jacob Loftus "Jake" Harper and Victoria Harper; nephew, E.C. "Trey" Harper III, who was like his brother and business partner; numerous extended family; and a multitude friends and associates. To send flowers or a memorial gift to the family of Mr. JERI LOFTUS HARPER please visit our Sympathy Store.
To order memorial trees or send flowers to the family in memory of Mr. JERI LOFTUS HARPER, please visit our flower store.
Send a Sympathy Card