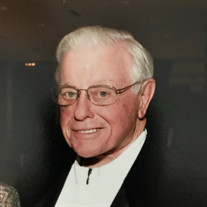 FORT WORTH -- Jerry G. Berkowitz passed away peacefully at home surrounded by his loved ones Wednesday morning, Sept. 20, 2017. Mr. Berkowitz was 86. Service: 11:00am, Sunday in the Barnett Sanctuary at Congregation Ahavath Sholom, 4050 S. Hulen Street. Following committal prayers, he will be laid to rest in Ahavath Sholom Cemetery. Shiva will be held at the Berkowitz residence, with minyan services beginning at 6 p.m. Sunday. Memorials: In lieu in flower, consideration of contributions to the Jessie Hart Lost Chords Club of Tarrant County or the American Cancer Society, in his memory, is suggested. Born and raised in the Bronx Borough of New York City, Jerry moved to Fort Worth,at the age of 16. He graduated from R.L. Paschal High School and attended Texas Christian University before beginning a career in the liquor business followed by a long career in real estate. Jerry was committed to his community and served as president of the Northside Lion’s Club, was a committee member of the Northside Rodeo and was head of Toastmasters. He was an avid golfer and spent many years enjoying the sport and making life-long friends at Ridglea Country Club golf course. Seventeen years ago, Jerry was diagnosed with laryngeal cancer and underwent a complete laryngectomy. He spoke with an artificial larynx but maintained his tradition of service by speaking at various middle and high schools about the effects of smoking with a focus on prevention. He assisted in the education of new nurses by presenting his story at the University of Texas at Arlington School of Nursing. After his laryngectomy, he joined the Lost Chord’s Club of the American Cancer Society, became president, and sponsored monthly lunches for the group. Jerry was a man of deep faith and enjoyed attending religious services at Temple Beth-El and Congregation Ahavath Shalom. He was a problem solver and experienced great-pleasure assisting others and helping them confront and resolve life’s challenges. The greatest love of his life was his family, his wife, children, grandchildren, and great grandchildren. He leaves a legacy of love, the gift of family, and an example of how to face life’s adversity with grace and courage. The family wishes to thanks Kindred Hospice and their devoted team of caregivers, S.L., Jackie, Monica, Lisa, and Latonya. SURVIVORS: In addition to his wife of 65 years, Ruth Hendelman Berkowitz, Jerry is survived by his children, Holly and Mike Clegg, Ilene and Bart Putterman, and Michael Berkowitz, nine grandchildren, and seven great grandchildren. To send flowers or a memorial gift to the family of Mr. JERRY G. BERKOWITZ please visit our Sympathy Store.
To order memorial trees or send flowers to the family in memory of Mr. JERRY G. BERKOWITZ, please visit our flower store.
Send a Sympathy Card