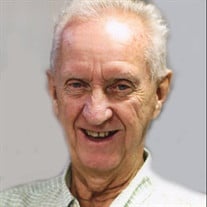 White Settlement, Texas – Jerry Don VanWinkle, passed away, Thursday, January 13, 2022. He was 80. Family and friends will gather from 2:30 to 3:00 pm Friday, February 11, in the Chapel at Robertson Mueller Harper with a Celebration of His Life beginning at 3 pm. Born in Bradford, Arkansas, Jerry was the son of Jessie and Hershall VanWinkle. After High School, he moved to Wisconsin, where he met and married, first wife, Lynne Pare’. Jerry made a living trimming trees for the electric company. They had two daughters Dawn and Frances. The family moved to Marquette Michigan, where his in-laws lived and owned a camp on the river. Jerry gained employment at Northern Michigan University. The family spent their summers at camp. Fishing, bon fires, boating, skiing and viewing the northern lights. Winters were just as fun, snowmobiling and cross-country skiing. He was a hockey season ticket holder for the Northern Michigan University, Wildcats and an avid Green Bay Packer fan. Following his daughters, he moved to Fort Worth and proudly purchased a home with a pool. Jerry was proud to be a grandfather to Kayla, and also considered her sister, Patrice and her son as grandchildren. Kayla and her husband, Nick gave him his great granddaughter, Katelynn, who he thought could do no wrong. He met and enjoyed a 10-year marriage to Laura Conde, who had three children. Jerry kept in touch with many of his extended family and friends. He also attended most of the annual all school class reunions in Bradford, Arkansas. He and his classmates traveled many times to Branson Missouri together. Jerry was gentle, caring, and generous. He volunteered at the Presbyterian Night Shelter and The Mission of Fort Worth food pantry. He also, donated generously to Veterans and Animal rescues. Jerry enjoyed spending time with family and friends. He loved sports, classic cars, all animals and especially loved playing cards. For nearly 30 years he, looked forward to his daily coffee shop friends and employees at “Westside Café”. In addition to his daughters, Dawn and Frances, Jerry is survived by his granddaughters, Patrice and Kayla and her husband, Nick; great-grandkids, Katelynn and Camden; and a host of cherished family and friends. To send flowers or a memorial gift to the family of Mr. JERRY DON VANWINKLE please visit our Sympathy Store.
To order memorial trees or send flowers to the family in memory of JERRY DON VANWINKLE, please visit our flower store.