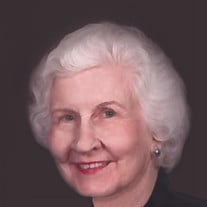 Fort Worth, Texas -- Jo Ann Beavers passed away peacefully Tuesday evening, July 6. Mrs. Beavers was 90. Service: A service in her memory will be held at 1:30 pm Tuesday, July 27, at Trinity Terrace Retirement Community, 1600 Texas Street. Born in Ranger, Texas, Jo Ann was the daughter of William Franklin and Meda Vaden Deaton. She graduated from Ranger High School before attending Ranger Junior College and Texas Tech University where she received a B.S. degree. It was at Texas Tech where she met her future husband, Doyle L. Beavers. Upon graduation and marrying Doyle, they were stationed with the U.S. Army Veterinary Corps in Utrecht, Holland. Following Doyle’s graduation from Texas A&M Veterinary College, they moved to Austin where they built a veterinary practice. Jo Ann was an active member of The Daughters of the Texas Republic and was a life time member of the Methodist Church. She was proceeded in death by her parents; husband, Dr. Doyle Beavers, who died in 2019; sister, Callie Deaton Mahaffey; and brother, Gene F. Deaton. In addition to nephews Scott Mahaffey and Stephen Mahaffey and their families, Jo Ann is survived by numerous other family members. To send flowers or a memorial gift to the family of Mrs. JO ANN DEATON BEAVERS please visit our Sympathy Store.
To order memorial trees or send flowers to the family in memory of Mrs. JO ANN DEATON BEAVERS, please visit our flower store.
Send a Sympathy Card