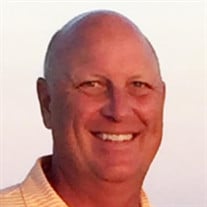 Fort Worth, Texas - John Wooldridge Anthony was born in Fort Worth to his parents, James E. Anthony and Jane Leonard Anthony. He became the 5th in line of 6 brothers and sisters that make up the Anthony family. John suffered a cerebral stroke at his home on March 5, that resulted in the termination of his life. Continuing his tradition of giving of himself in all he did, he continues his life in some measure as an organ donor.
John attended Arlington Heights High School and continued his education at both TCU and Schreiner University, where he graduated with his degree in business.
In the late 1990's, while working in Dallas, he met and fell in love with Melinda Lowery, better known as Missy. They started their life together on February 6, 1999, moving shortly thereafter to Fort Worth, where they established their place in the Fort Worth community. They were blessed with the birth of their son, John Elliott, on May 10, 2002, who is now a first-year student at the University of Montana.
John was affectionately referred to by his family and friends as "Big John", "Juan", "J.A." and "Johnny". Indeed, he was a Big Man physically, gifted with a Big Personality. In a room of family and friends, he was a Big Presence, a center of activity with his infectious Big Smile lighting up the room. And he was gifted with a Big Heart. And his departure from our presence has left a Big Hole in the lives of all who knew and loved him.
His most prized possession was his family and friends. He collected long lasting friendships wherever he went. That included his childhood friends, his college friends, his later circle of social friends, his associates and partners in business, and the many individuals who were his customers and clients.
John's professional career involved his contribution to the success and growth of the family's development of the Pecan Plantation community near Granbury. Over the last 22 years, he and his organization have been instrumental in the development of the commercial and residential properties in that community. As a homebuilder and realtor, he has served numerous families and individuals with quality service and products. John was an active participant in several real estate organizations.
In Fort Worth, John and his family have been long time members of the All Saints Episcopal Church and the Rivercrest Country Club. It was at Rivercrest that he spent treasured times with his friends on the golf course. John loved the game of golf, and he was an accomplished player, but perhaps best known for how far he could throw a golf club in frustration. He loved firing up his outdoor grill and preparing exceptional bar-b-que for a group of friends. He thoroughly enjoyed being outdoors, whether it be skiing or fishing. And his happy place has been at the family's Indian Creek Ranch, enjoying a day with Missy and Elliott, and tag along friends.
John is survived by his wife, Missy and son Elliott, his parents Jim and Jane Anthony, and five brothers and sisters, plus their spouses; Ben and LaDonna Anthony, Martha and Frost Prioleau, Sarah and Baker Gentry, all of Fort Worth, Mark and April Anthony of Dallas, and Matt and Beth Anthony of Atlanta, Georgia.
John was adored by a crowd of nieces and nephews, each considering Uncle John as an important part of their lives. This group of cousins include: Julie, Benjamin and Becca, John Randle and Hayden Anthony; Hutson and Sarah, Mack and Lauren, and Claire Prioleau; Matthew, Wesley, Mason, and Hendricks Anthony; Ashlyn, Luke and Allie Anthony; Charlie, Abby and Will Gentry.
A memorial service for John will be held at 3:00 pm Tuesday, March 22, at Christ Chapel Bible Church, 3701 Birchman Ave., Fort Worth. Immediately following will be a reception at the Rivercrest County Club from 4:00 to 6:00. The family wishes that these occasions be periods of celebration of John's extraordinary life, and that guests will attend in colorful and casual attire. Although we are broken and sad, John would want all of us laughing, rather than mourning.
Memorial contributions may be directed to the First Tee of Fort Worth, where a John Anthony Memorial Gift is being established. Address donations to: First Tee of Fort Worth, 1900 Rockwood Park Drive N., Fort Worth, Texas 76114, https://firstteeftworth.org

To order memorial trees or send flowers to the family in memory of JOHN WOOLDRIDGE ANTHONY, please visit our flower store.