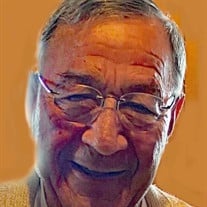 Lipan, Texas -- John Lyndal Guinn died Thursday, February 4 in a Fort Worth hospital. He was 77. Born in Davis, Oklahoma, Johnny was the fourth of five sons born to J.D. and Delma Guinn. His family moved to Fort Worth in 1958 where Johnny attended R. L. Paschal High School, graduating in 1961, but not before becoming the unofficial "Mr. Paschal." He was a champion Golden Gloves Regional boxer and also competed in saddle bronc and bull riding on the Paschal rodeo team. After school, he began a career in construction before transitioning to the oil and gas industry in the late 1970s, founding Mineral Wells-based Westridge Oil & Gas Properties. Despite a downturn in the industry in the company's initial years, Johnny persevered and made it a success through a unique determination and work ethic. Johnny was the original "girl dad," raising two strong and independent daughters. He met his beloved Patty in 1978 and his life was never the same. They married in 1987 and built a beautiful life of God, grandchildren, friends, and ranching. He will be missed by his family and so many amazing friends. In addition to his wife, Patty, Johnny is survived by his much-loved daughters, Kerri Harris and her husband Jim, and Christie Thomas and her husband, Mike; as well as six spectacular grandchildren, Zachary Harris, Tyler Harris, Gage Harris and his wife, Noelle, Hannah Ray, Caitie Whitley and her husband, Brandon, and John Pace Storey. He didn't think life could get any better but then came his treasured eight great-grandchildren, Brileigh Ray, Aidan Harris, Harlow Harris, Riggs Whitley, Laramie Ray, Rowan Harris, Scout Whitley and Lyndan Harris. Family and friends will gather from 5 to 7 p.m. Monday in the Great Room at Robertson Mueller Harper. A private service at the grave will be held in Greenwood Memorial Park. Johnny’s life will be celebrated at 2:30 p.m. Tuesday at Angelo’s BBQ, 2533 White Settlement Road, Fort Worth, TX 76107. In lieu of flowers, consideration of contributions to Westaid Fook Bank, Westaid Food Bank, www.westaid.org, in Johnny's honor, is suggested. To send flowers or a memorial gift to the family of Mr. JOHN LYNDAL GUINN please visit our Sympathy Store.
To order memorial trees or send flowers to the family in memory of Mr. JOHN LYNDAL GUINN, please visit our flower store.