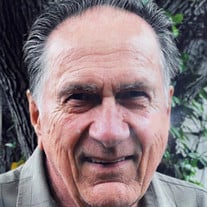 FORT WORTH – John M. Vukovich passed away peacefully Thursday morning. Johnny was 90. John, aka “Hardnose,” was the son of Mathew and Eva Vukovich, both from Yugoslavia. He, was an Eagle Scout leader, National Champion Oarsmen and tried out for the Olympics. After serving in the U. S. Air Force during the Korean War, John became an Electronic Technician by trade. He worked on the F-111 at General Dynamics, later served his union as a business agent and retired from Freight Master. Retirement not slowing him down, John watched over his community as a Code Blue Patrolman for over 20 years. He was preceded in death by his parents and siblings and their spouses, Peter and Mimi, Paul, Louie and Carrie, Anne and Paul, Milan and Donna, and Kathryn. In addition to his wife of 65 years, Martha, John is survived by his daughters, Cindy, Debbie, and Lisa and her husband, Keith; grandchildren, Jennifer and Keith, Tracie and Trey, Matthew, Justin and Rachel; and great-grandchildren, Trey, Chelsea, Roderick, Noelle, Christian, and Ashlynn. MEMORIALS: In lieu of flowers, consideration of contributions to THE WARM PLACE, in his memory, is suggested. To send flowers or a memorial gift to the family of Mr. JOHN MATHEW VUKOVICH please visit our Sympathy Store.
To order memorial trees or send flowers to the family in memory of Mr. JOHN MATHEW VUKOVICH, please visit our flower store.
Send a Sympathy Card