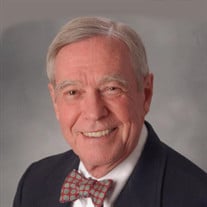 Fort Worth, Texas - Lee Brooks Freese, a pioneering Texas engineer, extraordinary mentor and devoted father, husband, brother, grandfather and uncle, died Wednesday morning, March 15, at age 86.
Known for his impact on the engineering profession during a six-decade career at the firm named for his father — Freese and Nichols — Lee was also an opera lover, world traveler, cyclist, skier, and longtime volunteer in the community where he spent most of his life.
Lee was born in Fort Worth to Simon and Eunice Brooks Freese. As a high school student in Fort Worth, Lee did drafting and other such work at Freese and Nichols in the afternoons and over holidays, which gave him practical experience before he headed off to college at the Massachusetts Institute of Technology. He graduated with a bachelor's degree in civil engineering in 1958 and started full-time at Freese and Nichols that June.
During the first part of his career, Lee spent several years in the field to see the construction side of water supply projects from West Texas to Arkansas. That experience gave him invaluable insights into working with contractors and delivering for clients. He embodied the fundamental Freese and Nichols values of client service, professional excellence and relationship-building. And he helped develop young employees to be leaders in their field and in the company by sharing his own wisdom and expertise while nurturing their skills and confidence.
By profession, Lee was a hydraulics expert. He specialized in designing water pipelines and pump stations, and his innovative ideas and leadership on multimillion-dollar projects helped make clean water possible for millions of Texans. While he followed his father into civil engineering and loved to tell stories about his work, Lee also supported his children — daughter Elizabeth and twin sons John and Robert — when they chose less technical paths. Lee once rendezvoused with his sons at a monastery in France where John was living as a Buddhist monk.
Lee was no ordinary traveler: A trip to Bhutan was among his excursions, and he journeyed by train from Beijing to Moscow. But Red River, New Mexico, was his favorite location. Growing up, he went there with his family during the summers, and later he built his own cabin and spent about half the year there enjoying hiking, birdwatching, reading, and time with extended family and neighbors.
Though he didn't sing, Lee loved opera for its drama and expression of intense emotion — a contrast to the engineer's less demonstrative exterior. Never a fair-weather fan, he also passionately followed the Cowboys and Rangers for decades.
His devotion to his community included serving on the boards of directors for the Fort Worth Opera Association, Arts Council of Fort Worth, Saint Joseph Hospital, Plaza Medical Center and the Fort Worth Chamber Foundation. He was a past president of Steeplechase and a longtime member of Rivercrest Country Club.
Lee's legacy at Freese and Nichols lives on, not just through the work he did but through the people he guided. To honor his exemplary dedication to staff, the company each year recognizes an employee with the Lee B. Freese Excellence in Mentoring Award.
At a celebration of his 60th anniversary with the company, Lee shared some advice that helped him succeed: "Be a good listener and don't be arrogant," he said. "Humility is the beginning of wisdom."
His family would like to express their gratitude to the nursing staff at Trinity Terrace for their care and compassion shown to Lee.
He was preceded in death by his parents and sister, Eunice Rutledge.
In addition to his wife, Dana, of Fort Worth, Lee is survived by his daughter, Elizabeth and her husband, Talley Summerlin, of Madison, New Jersey, and their daughters, Rose and Vivian; his sons, John and his wife, Claudia Arteaga-Olortegui, of Claremont, California, and Robert and his fiancé, Malgorzata Walczak, of Dublin, Ireland; his stepchildren, Jon and Jennifer Snyder; his brother, John Freese and his wife, Jane, of Fort Worth; numerous nieces and nephews; and Ann Freese, mother of Elizabeth, John and Robert.
A Celebration of His Life will be held at 2 pm Monday in the Great Hall at First Presbyterian Church, 1000 Penn Street, with a reception after in the church's Concourse area. Following a private committal service, he will be laid to rest on the Freese Family Plot in Greenwood Memorial Park.
In lieu of flowers, consideration of contributions to the Fort Worth Opera, in his memory, is suggested.

To order memorial trees or send flowers to the family in memory of LEE BROOKS FREESE, please visit our flower store.