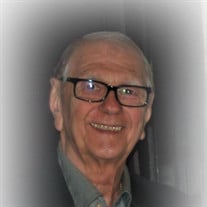 DALLAS -- Lewis Thomas "Lew" Lamark passed away peacefully at his home Wednesday morning May 3, 2017, after a short battle with cancer. Always caring more for others than for himself, he was making jokes and putting smiles on the faces of his family, friends, and healthcare professionals until the very end. Mr. Lamark was 78. Services: A committal service will be held 11 a.m. Friday in Ahavath Sholom Cemetery, 411 N. University Drive, Fort Worth, with a memorial service to follow at 2 p.m. in the Stern Chapel at Temple Emanu-El, 8500 Hillcrest Road, Dallas, with Rabbi David Stern officiating. Shiva and a minyan service will take place in Dallas at the home of Shelley and Jeff Becker on Friday afternoon, beginning at 5 p.m. Memorials: In lieu of flowers, consideration of contributions to St. Jude Children’s Research Hospital or the American Cancer Society, in his memory, is suggested. Born Feb. 19, 1939 in Brooklyn, New York, Lew spent most of his life in Texas. Upon graduation from high school in Houston, he weighed half a dozen college basketball scholarships and played for the University of Oklahoma. College basketball, his first love, would remain as one of his true passions throughout his life. His next love, jazz, was soon added, first as a jazz saxophonist, and then as a lifelong fan. But his true love, his wife, Arlene, and the family they created together, outshined them both. Lew married Arlene Hoffman, his wife for 53 years, April 12, 1964, at Congregation Emanu El in Houston. They raised their two amazing girls, Shelley and Jodi, in Fort Worth. Later with their husbands, Jeff Becker and Donnie Hughes, each couple gave Lew two precious grandsons, Ryan and Alec Becker and Connor and Braeden Hughes. While Lew loved and adored his wife and daughters and sons-in-law, it was his grandsons that became the center of his life. No grandfather could have doted more or been prouder of his grandchildren. Lew was loved by and was an inspiration for his family and friends, and he will be sorely missed. Survivors: In addition to his wife, Lew is survived by his daughters and their husbands and his grandsons; and his brother-in-law and his wife, Jerry Hoffman and Julie. To send flowers or a memorial gift to the family of Mr. LEWIS THOMAS LAMARK please visit our Sympathy Store.
To order memorial trees or send flowers to the family in memory of Mr. LEWIS THOMAS LAMARK, please visit our flower store.