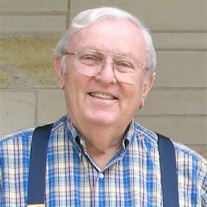 FORT WORTH -- Marc Herbert Lowrance Jr., a beloved husband, father and grandfather, passed away peacefully early Tuesday morning, April 26, 2016, and was received safely and securely in the arms of God's love. Memorial service: 2 p.m. Friday in the Leonard Memorial Chapel at the First United Methodist Church of Fort Worth, 800 W. Fifth St. Interment: He will be laid to rest privately in Greenwood Memorial Park. Memorials: In lieu of flowers, consideration of contributions to the Permanent Endowment Fund of St. John the Apostle United Methodist Church, 5450 Mansfield Road, Arlington, Texas 76017, in his memory, is suggested. Born in Fort Worth on April 15, 1935, Marc was the son of Marc H. and Dorothy Davies Lowrance. He grew up primarily in Ardmore, Okla. but moved to Oklahoma City before his senior year in high school. He graduated from Classen High School and returned to Fort Worth to attend Texas Christian University (TCU). After TCU, Marc was drafted into the U.S. Army with continuing time in the army reserve. Marc met Mary Ann Nolen while visiting his father in Oklahoma City. The two were married on Sept. 15, 1956, and ended up settling in Fort Worth in 1960. They were blessed with two children, Marc H. Lowrance III in 1959 and Kay Kristen Lowrance in 1963. Marc enjoyed a long and successful career as an independent oil and gas producer in Fort Worth. He was a member of the First United Methodist church of Fort Worth, Rivercrest Country Club, and the Petroleum Club of Fort Worth, where he served as president in the 1980s. An avid horse race fan and owner, Marc enjoyed wonderful times with family and friends in Hot Springs, Ark. Most of all, he cherished his family and was a loyal friend to many. Survivors: In addition to his wife of 59 years, Mary Ann, Marc is survived by his children, Marc III of Arlington and Kay Moreland and her husband, Eric, of Austin; grandchildren, Luke and Pete Lowrance and Gracie and Georgia Moreland; and cousin, Frank Halpin Jr. and his wife, Lana, of Fort Worth. To send flowers or a memorial gift to the family of Mr. MARC HERBERT LOWRANCE, Jr. please visit our Sympathy Store.
To order memorial trees or send flowers to the family in memory of Mr. MARC HERBERT LOWRANCE, Jr., please visit our flower store.
Send a Sympathy Card