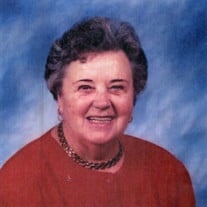 FORT WORTH – Maria Scholz Gill entered the Lord’s rest Sunday afternoon, April 26, 2020. Mrs. Gill was 99. SERVICE: She will be laid to rest next to her husband, David, who died in 2003, in Hicks Cemetery, Ashdown, Arkansas. A celebration of her life will be held at a later date. MEMORIALS: In lieu of flowers, consideration of contributions to the National Kidney Foundation, in her memory, is suggested. Born February 6, 1921 in Schongau, Bavaria, Maria married in 1951 and immigrated to the United States in 1952. She became an American citizen in 1953. Maria was a member of the Eastern Star Castleberry #1028, River Oaks United Methodist Church and was a life member of the German American Club. She raised four children and worked full time at Edelweiss Restaurant until she was 83. Marie made many friends and will be missed very much by all who knew her. She was preceded in death by her parents, husband, daughter, Mary Jane and grandson, Ryan Hebb. Survivors: In addition to her son, David T. Gill of Fort Worth, Maria is survived by her grandson, Michael Gill; daughters, Dinah and Evelyn; and sisters, Fannie Hiltz and Annie Wilke of Germany. “Come to Me all you who are weary and burdened and I will give you My rest.” Matthew 11:27 Rest in peace mom, we love you! To send flowers or a memorial gift to the family of Mrs. MARIA SCHOLZ GILL please visit our Sympathy Store.
To order memorial trees or send flowers to the family in memory of Mrs. MARIA SCHOLZ GILL, please visit our flower store.