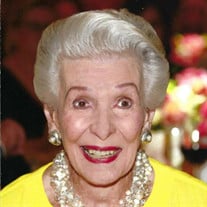 Fort Worth, Texas - Mildred Hedrick Fender died peacefully Thursday afternoon, August 26, surrounded by her family. Mrs. Fender was 94. Mildred devoted her life to the community of Fort Worth, its institutions and organizations, her family and many friends. Her charm, elegance, grace and style made her a beloved friend and companion to a diverse array of people, from those who occupied the halls of power to those who cleaned the halls of power. Born in Fort Worth, Mildred was the oldest daughter of Wyatt C. and Mildred Sterling Hedrick. Her father was a distinguished architect, responsible for numerous Fort Worth landmarks including Will Rogers Memorial Complex, T&P Station & Office Tower, and Amon Carter Stadium. Her grandfather, Ross S. Sterling, was a founder of Humble Oil and 31st Governor of the State of Texas, 1931 to 1933. Mildred was in the first class to graduate from North Hi Mount Elementary School, a building designed by her father. She graduated high school from Kinkaid School in Houston and from there went on to graduate from Smith College, in Northampton, Massachusetts. She was married to Howard M. Fender Sr. for 13 years; they had four children. Mildred never had a paying job, but she worked tirelessly to make Fort Worth the cultural center it has become. She served on the board of the Fort Worth Symphony for over 60 years and the board of the Texas Ballet Theater for over 30 years. She was a member of the Junior League, Fort Worth Garden Club, Historic Fort Worth, Fort Worth Lecture Foundation, Jewel Charity Ball (Past President), Assembly, Woman’s Club of Fort Worth, and Colonial Dames. She enjoyed volunteering as an usher at Bass Hall, especially during the day when school children came by the busloads. Mildred was involved with the Van Cliburn International Piano Competition from its inception in 1962, and for three competitions she chaired the Social Committee, ensuring competitors and jurors from around the world were treated to Fort Worth’s finest hospitality. It was in this role as an ambassador for Fort Worth that Mildred inspired multiple generations of volunteers into service with her motto, When You Rest, You Rust. Mildred was devoted to her family and friends, traveling far and wide to be with them. Every summer for forty years she drove, by herself, to New York to spend time with her daughter and grandchildren. On many of those trips her return was by way of Wyoming and Colorado to visit friends. Over the last 15 years she came to think of Guanajuato, Mexico as a second home because of time spent there with one of her sons. Mildred was a member of a ladies poker group that played a penny ante game every Tuesday from the 1950’s until just a few years ago. Travelling and entertaining were important parts of Mildred’s life. She visited every continent, except Australia and Antarctica. Mildred’s style of entertaining was legendary and from a bygone era. A dinner party at Mildred’s would have a theme and a title. The table decorations and place settings would follow the theme. There would be handwritten menus, with the date and title of the dinner, handwritten place cards at each seat, and there was always a theme related party favor at each place setting so guests would leave with a memento by which to remember the evening. Mildred’s love of the performing arts began as a child and was at the core of her being. The list of great performances she saw spans many genres and venues from performances at the “Old” Metropolitan Opera House of New York in the 1940’s to Cher at the American Airlines Center in Dallas in the 2010’s. In 1944 she saw the original Broadway production of “Oklahoma.” It would be difficult to name a great performing artist of the past eighty years, whether it be a musician, singer, dancer or stage actor, which Mildred did not see perform live. For four years prior to the pandemic shut down, she rarely missed the weekly performance of the Bucket List Band led by her friend and contemporary, 99 years young, Jim Milam. Mildred loved artists and they loved her. This was evidenced by the parade of musicians coming to her house over the past 2 months to perform an encore for her. The performing arts community of Fort Worth lost one of its greatest patrons and admirers. Her family would like to thank Dr. Robert Kelly for the care and wisdom he provided through the years, especially the last 18 months. They would also like to thank the Comfort Keepers caregivers, Jen, Dora, Vicki and Nancy for the care and compassion they provided over the last 18 months, and to St. Gabriels Hospice for the special care they provided this last month. She was preceded in death by her daughter, Gage Fender Brown, half-sister, Pauline Hedrick Coffey and her sister, Jean Hedrick Darden. In addition to her sons, Howard Martin Fender Jr., Wyatt Hedrick Fender Sara Hannes and James Ernest “Ames” Fender II, Mildred is survived by her son-in-law, Gregory Alexander Brown Sr.; eight grandchildren, Creel Caldwell Brown, Cabell Sterling Brown, Gregory Alexander Brown Jr., Gage Sterling Fender, Katilee Martin Fender, Georgia Katherine Fender, India Sterling Fender, and King Hedrick Fender; and three great-grandchildren, Riley Marie Gage Brown, Alexander Devlen Brown, and Wyatt Aaltje Fender. A Memorial Service will be held at 2 pm Friday, September 10, at First Presbyterian Church of Fort Worth, 1000 Penn Street. In lieu of flowers, consideration of contributions to the Fort Worth Symphony Orchestra, Texas Ballet Theater, Van Cliburn Foundation or Bass Hall, in her memory, is suggested. To send flowers or a memorial gift to the family of Mrs. MILDRED HEDRICK FENDER please visit our Sympathy Store.
To order memorial trees or send flowers to the family in memory of Mrs. MILDRED HEDRICK FENDER, please visit our flower store.
Send a Sympathy Card