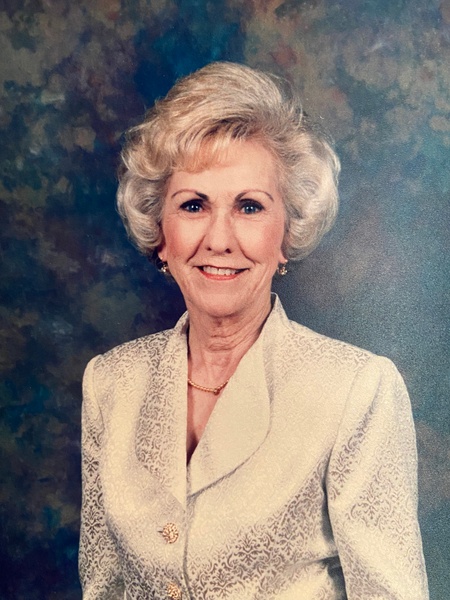 Fort Worth, Texas – Oleta Fern Sikes entered glory on Thursday afternoon, June 16, at her home surrounded by her loving family.  She was living in her 99th year.

Born in Brownfield, Texas, she was the daughter of John Bolton and Lizzie Franklin Lewis, a farming family with ten siblings.

Leta married the lover of her life, John Clayton Sikes Jr. on January 11, 1947.  Being a wife and mother was one of the great joys of her life and she was blessed with two children, Steve and Susie.

In 1974, when the Lord called her husband home, Leta went from the kitchen to the boardroom, running AMSCO Steel Company until 2013.  She held positions on countless boards of all sorts of organizations, but her one true passion in life was serving her Lord and Savior, Jesus Christ, at her beloved Arborlawn United Methodist Church, her church home where she gave not only her resources, but her time wholeheartedly.

There’s no one like Oleta Fern.  She has meant so much to so many people and carried many different names.  She was Oleta Fern, Leta, Aunt Lete, Mom and Mrs. Sikes.  But we think the names she cherished most were Granleta and Daughter of the Most High King.  We will love her for the rest of our days and expectantly await the moment when we get to see her again!

Leta was laid to rest privately next to her husband, John, on Monday, June 20, in the Mausoleum at Greenwood Memorial Park.

Memorials:  In lieu of flowers, consideration of contributions to the Arborlawn Foundation, in her memory, is suggested.

To order memorial trees or send flowers to the family in memory of OLETA FERN LEWIS SIKES, please visit our flower store.