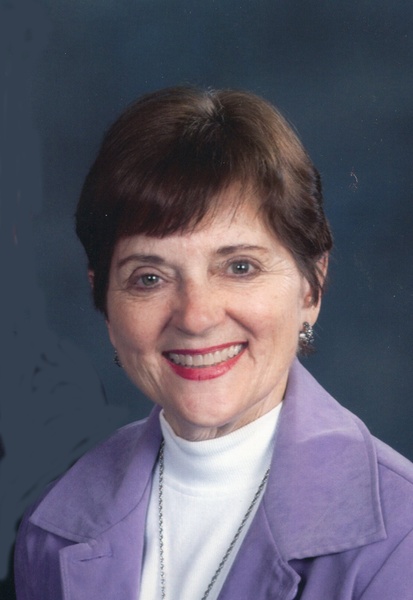 Fort Worth, Texas - Patricia Smith Wooley passed away Saturday morning, July 16, after a short battle with brain cancer.  She was 84 years old.

Patti was born Beverly Patricia Smith on March 8, 1938, in Denton, TX to Bud and Dina Smith.  The family, including her older brother Michael, soon moved to Brownsville, TX to own and operate an orchard farm.  They made many special friends while living there, and many of those relationships are maintained to this day.  As a child, she became a voracious reader and found a love for music, learning to play the piano.  It was there in Brownsville that her lifelong love for the ocean began.

The family moved to Corpus Christi before her senior year of high school, where Patti graduated early from CC Ray High School, and she then began taking classes at Del Mar College.  Her father was a salesman for the local TV station, and she began a Saturday afternoon TV show called Teen Canteen.  It was kind of a Mickey Rooney styled variety show, full of teen actors performing skits and songs, always looking to “put on a show.”  While at Del Mar College, a mutual friend set her up on a blind date with a student, Robert Wooley, from nearby University of Corpus Christi.  Patti soon enrolled at Texas Wesleyan College in Fort Worth for the 1956-57 school year.

TWC proved to be a perfect place for Patti, a place where she could expand her love for music, and to also explore her love for the theater.  She joined her beloved Sigma Alpha Iota music sorority in 1957.   As a student, she made many lifelong friends in SAI, while also serving as chapter president her senior year.  Patti continued her association with SAI by joining the FW Alumni Chapter after graduation, also serving as President and in other leadership positions.  She truly adored helping the next generation of SAI students.  All told, Patti has been involved with SAI for 65 years.  She lamented that her illness this summer prevented her from attending the SAI National Convention, missing for the first time since she attended the Chicago convention in the 1960s.

TWC did not, however, dampen the developing relationship with Robert.  At mid-term her junior year, Robert graduated from UCC and they were married January 25, 1958, in Corpus Christi.  They moved to Ft Worth so she could continue with school at TWC, but within weeks Robert had been drafted to the Army and sent off to basic training.  Patti’s grandmother, Ethel Everett, came and lived with her in a house close to campus while Robert was away.  Patti graduated with a BA in Music in the Spring of 1959, and by then Robert had been transferred to Ft. Hood, TX, and she moved there to be with him.  Rett was born at Ft. Hood in 1959.  Upon Robert’s discharge from the Army, they moved to Ft. Worth, and Mark was born in 1961 and then Randy in 1964.

Patti and Robert joined Broadway Baptist Church in 1960 and were members ever since. Patti’s involvement and support of the church took many forms.  She joined the Women’s Missionary Union (WMU), served as a Sunday School teacher, translated for the Baptist Center, she began serving on numerous church committees, and was elected to be a Deacon.  Possibly her most enjoyable role, however, was in creating what became the Broadway Players, a loose knit group of church members that would put on skits and plays at the church.  Patti wrote and/or directed many of them.  She wrote the play, The Lower Room, which has been published.  This play has been performed several times at Broadway and is the story about what the women may have been thinking and doing as they waited downstairs while Jesus and the Disciples were upstairs for the Last Supper.  All told, the Broadway Players have made 94 presentations since 1970.

As her children grew older, Patti was recruited by former Broadway pastor JP Allen to work in the Correspondence Counselling department of the Southern Baptist Radio and TV Commission (RTVC).  She worked there for over 20 years, retiring in the late 1990s as Director of Correspondence Counselling.  While working there, she also completed her Master’s Degree in Religion from Texas Christian University.

Patti enjoyed supporting the Ft. Worth arts scene.  She had season tickets to the FW Symphony, volunteered at the Cliburn Competition, went to plays at Stage West, and visited the Kimball.  She liked introducing her grandchildren to these arts, as well.  If her husband couldn’t go, she would always invite a friend that she thought would enjoy it.

Patti and Bob were fortunate to be able to do quite a bit of travelling.  Some of her favorite trips were to Europe to see the great cathedrals and pipe organs that many of the great composers played.    In addition to going all over Europe, she toured the Holy Land, southern Africa, Bermuda and the Caribbean, Mexico, Peru, Japan, China, Russia, Alaska, Hawaii, and many US states.  In addition to her personal travels, her involvement with Sister Cities and with Friendship Force allowed her to enjoy experiencing the different cultures and peoples from around the world.  The world map in her office at home has over 120 little red dots marking the locations she has been.  And she has the photo albums to prove it!!

Patti and Bob enjoyed hosting the family at their condo in Port Aransas/Corpus Christi.  Robert got to go fishing and Patti played in the surf on the beach.  They helped the grandchildren build sandcastles and ride boogie boards in the surf, creating a lifetime of memories.  Meme always wanted “one more swim” before they headed home.

She is preceded in death by her beloved husband, Robert Wooley in 2013, and her brother Michael Smith.

Family and friends will gather from 5 to 7 p.m. Friday in the Great Room at Robertson Mueller Harper.  A Memorial Service celebrating her life will be held at 10 a.m. Saturday in the Sanctuary at Broadway Baptist Church, 305 W. Broadway Avenue, with the service being livestreamed online at broadwaybc.org/live-stream.

In lieu of flowers, please consider a gift to “Dina’s Glen:  The Quiet House at Camp Broadway” or to the Fort Worth chapter of Sigma Alpha Iota.  Checks can be sent to Broadway Baptist Church.

To order memorial trees or send flowers to the family in memory of PATRICIA SMITH WOOLEY, please visit our flower store.