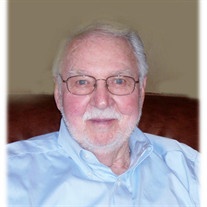 KELLER -- Paul Edward Blakeley passed away peacefully early Tuesday morning, Feb. 21, 2017. Mr. Blakeley was 91. Memorial Service: 1 p.m. Saturday at Keller United Methodist Church, 1025 Johnson Road, Keller. Family and friends will gather from 5 to 7 p.m. Friday in the Great Room at Robertson Mueller Harper. Memorials: In lieu of flowers, consideration of contributions to Community Hospice of Texas, in his memory, is suggested. Born Aug. 17, 1925 in Roanoke, Paul was the son of Clarence William and Maggie Elizabeth Berry Blakeley. He graduated from Keller High School before serving in the U.S. Navy and was a Veteran of World War II. After the war, Paul attended North Texas State University. Following NTSU, he enjoyed a very long and prestigious career with General Telephone. Retiring at age 62, Paul and his wife, Joann, enjoyed travelling, exercising and socializing. Paul was a 33 Degree Master Mason and was a member in high standing of the Keller Lodge #1084, A.F. & A.M. He was also an active member of Keller United Methodist Church. His loving and generous heart will be missed deeply by his family and friends. He never knew a stranger and his loud and infectious laughter was unforgettable. He was preceded in death by his parents; wife of 59 years, Joann; his eldest son, Michael Paul Blakeley; and his sisters, Mary, Beth and Bobbie. Survivors: In addition to his son, David and his wife, Shannon of Argyle, Paul is survived by his daughter-in-law, Rebecca of Houston; grandchildren, Tarah and Duran of Houston, Cameron and his wife, Amy of San Antonio, and Preston and Carson of Argyle; great-granddaughter, Elliot Rose; soon to be great-grandson, Emmett of San Antonio; and nieces and nephews and their families. To send flowers or a memorial gift to the family of Mr. PAUL EDWARD BLAKELEY please visit our Sympathy Store.
To order memorial trees or send flowers to the family in memory of Mr. PAUL EDWARD BLAKELEY, please visit our flower store.