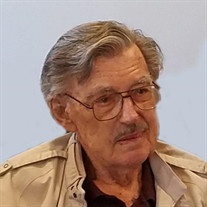 Jack Juengermann died peacefully at home Saturday morning, April 7, 2018. He was 94. MEMORIAL SERVICE: A celebration of his life will be held 2:00 p.m. Friday at Trinity Lutheran Church, 3621 Tulsa Way. Born July 25, 1923, Jack was the only child of Raymond H. and Norma Voges Juengermann of Gonzales County. He had a happy childhood, during the depression, on their cattle ranch, where he loved riding horses and playing with his cousins. Jack was drafted into the Army 1943, and became a B-17 bomber pilot over Europe with 29 missions. He was an officer in the 92nd Bomber Group, 8th Air Force. After the war, Jack became a commercial airline pilot, and remained in the reserves. He retired from the U. S. Air Force in 1983 as a Lieutenant Colonel. While flying, Jack also helped his father run a ranch in Gonzales County where he raised cattle and rode horses. He loved all forms of outdoor and animal life; he could shoe a horse, lasso a cow, build a barn, or deliver a calf, all with equal aplomb, considering himself (with a wry smile) as a “Jack” of all trades. He was proud of his German-Texas ancestry, and loved researching and talking to others about family and Texas history. Jack traveled widely as a pilot, and he and Esther continued to travel overseas after his retirement. For many years, Jack and Esther lived in San Antonio, where they were long-time members of Christ Lutheran Church of Alamo Heights. They moved to Fort Worth to be near their daughter in 2006, and became members of Trinity Lutheran Church, where they remained active until the present day. SURVIVORS: In addition to his childhood friend and loving wife of 67 years, Esther Rossow Juengermann, Jack is survived by his daughter, Jennifer Hill and her husband, Ken; granddaughters, Elisabeth Fairbanks and her husband, John and Rebecca Hill; great-grandson, Hunter Rodriguez; and by many cousins, a large extended family, and many friends. To send flowers or a memorial gift to the family of Mr. RAYMOND ADOLPH "Jack" JUENGERMANN please visit our Sympathy Store.
To order memorial trees or send flowers to the family in memory of Mr. RAYMOND ADOLPH "Jack" JUENGERMANN, please visit our flower store.