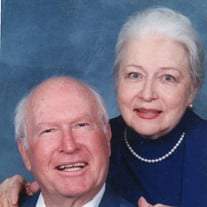 FORT WORTH -- Raymond Leroy Scott passed away peacefully Monday morning, Dec. 4, 2017. Mr. Scott was 91. Service: 11 a.m. Friday in the sanctuary of the First Presbyterian Church, 1000 Penn Street. Family and friends will gather in the church's Concourse Area immediately following the service. Masonic Rites will be given at 2:30 p.m. Friday at Newberry Cemetery in Dennis. Memorials: In lieu of flowers, consideration of contributions to either of Raymond's favorite charities, the Scottish Rite Hospitals, www.scottishritehospital.org, or The Shriners Hospitals for Children, wwwshrinershospitalsforchildren.org, in his memory, is suggested. Born May 26, 1926 in Wichita Falls, Raymond was the fourth of seven children of James Chambers and Alice Anna Rowe Scott. Known best as "Scotty" to his friends and family, "Papa" to his grandchildren and "Uncle Roy" to many nieces and nephews, he spent his life making new friends and had a gift of serving his fellow man. His most noted quote was "do a little good each day." Raymond enjoyed dancing, playing golf, traveling and joined many service organizations during his lifetime. Most of all, he loved his family. He met and later married his "lost rib", Dalia Teresa Black on March 7, 1954. After graduating from Wichita Falls High School, Class of '44, Raymond served as a U.S. Naval Crewman during World War II. He returned to Wichita Falls where he graduated in 1950 from Midwestern State University, receiving bachelor degrees in mathematics and education; he remained an active alumnus. Raymond completed his Chartered Life Underwriter and retired after 44 years with Aetna/ING Life Insurance. He was a Quarter Century Member of the MDRT. A Master Mason, he was a member of Faith Masonic Lodge in Wichita Falls, Moslah Shrine and its Patrol Unit. His memberships also included the First Presbyterian Church of Fort Worth, The International Good Neighbor Council and The Sertoma Club. Raymond was also a life member of the Rotary Club of Western Fort Worth. He was preceded in death by his parents; son, James Wayne Scott; daughter-in-law, Kazuko Scott; brothers, Buddy and Marion; and sisters, Lula Mae and Betty. Survivors: In addition to his wife of 63 years, Dalia, Raymond is survived by his sons, Raymond L. Scott Jr., Roger Alan Scott and his wife, Kimberly, and Richard D. Scott and his wife, Wendy; grandchildren, Daniel and his wife, Brandie, Michael, Joshua, Elizabeth, Forrest, Alana, Christina Luquis and her husband, Sam Ducklow, and Joshua Luquis; great-granddaughter, Lavinia; brother, John Scott; sister, Joyce Lacy; and many nieces and nephews and their families. To send flowers or a memorial gift to the family of Mr. RAYMOND LEROY SCOTT please visit our Sympathy Store.
To order memorial trees or send flowers to the family in memory of Mr. RAYMOND LEROY SCOTT, please visit our flower store.