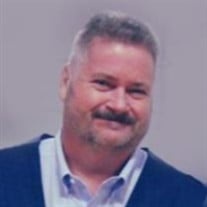 Fort Worth, Texas - Ricky Wayne Coomer passed away unexpectedly Friday morning, February 18. He was 52. Family and friends will gather from 5 to 7 pm Monday in the Great Room at Robertson Mueller Harper. A Celebration of his life will be held in the funeral home’s Chapel at 1 pm Tuesday, followed by interment in Emerald Hills Memorial Park. Born in Fort Worth, Ricky was the son of Bobby Wayne and Nancy Carol Bailey Coomer. The ultimate salesman at heart and the biggest movie buff, he enjoyed searching for great deals at estate sales and watching his beloved Washington Redskins. Ricky “Papa” was an exceptional man who loved his family; even more so his grandchildren. He lived to make them smile and was always the life of the party. He will be dearly missed by anyone who had the pleasure of meeting him. He was preceded in death by his parents and brothers, Mike Shelton and Jeff Lohe. In addition to his wife, Cortnee Johnston Coomer, Ricky is survived by his daughters, Kayla Coomer and her partner, Jackie, Kaycee Torres and her husband, Jacob, and Kaytee Coomer and her partner, Rodney; his son, Tyler Coomer and his partner, Jolina; his grandchildren, Rhyder, Jesee, Josey, Jarett, Jaxson and Waylon; sister, Glenda Shelton; and his sweet Luna Mae Coomer; as well as numerous aunts, uncles, nieces, nephews and cousins.

To order memorial trees or send flowers to the family in memory of RICKY COOMER, please visit our flower store.