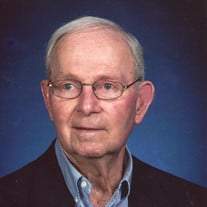 FORT WORTH -- Robert Peironnet “Pucker” Barse Jr. passed away peacefully Wednesday morning, March 29. Mr. Barse was 89. Service: 1 p.m. Monday in the chapel at Robertson Mueller Harper with the Rev. Kendra Mohn, Lead Pastor at Trinity Lutheran Church, officiating. Following the service, he will be laid to rest in Greenwood Memorial Park. Memorials: In lieu of flowers consideration of contributions to Trinity Lutheran Church, 3621 Tulsa Way, Fort Worth, TX 76107, or to Cook Children’s Medical Center, 800 Seventh Avenue, Fort Worth, TX 76104, in his memory, is suggested. Born Oct. 25, 1927 in Fort Worth, Robert, “Pucker” as he was known to family and friends, was the son of Robert P. and Leween Matthews Barse. After graduating from R. L. Paschal High School in 1945, he attended Texas Christian University on a basketball scholarship. In October, he was drafted into the U. S. Army and served during World War II. After the war, Pucker continued his education at North Texas State, now the University of North Texas, procuring an art degree while continuing his basketball career. While attending NTS, Pucker met his loving wife, Geneva Quebe. After marrying on Aug. 16, 1952 at Zion Lutheran Church in McGregor, they moved to Fort Worth and began building a wonderful life together, filled with their two sons, a host of dear friends, esteemed co-workers and a successful and fulfilling career with Container Corporation of America. Pucker was admired by both friends and those with whom he worked as he truly listened and his sharp intellect allowed him to quickly and accurately assess any situation. He and Geneva moved in 1973 to Geneva, Ill. where he continued to further his corporate career, meeting and exceeding business goals which allowed him to retire in 1984 and return to Fort Worth. Retirement allowed Pucker to pursue his many hobbies and interests which included golf, wood working, writing, reading, painting and being a member of “The Magnolia Mafia. He was a true gentleman, loving husband, father and grandfather. He will be missed by all who knew him. Survivors: In addition to his wife of 65 years, Geneva, Pucker is survived by his sons and their wives, Bill and Karen Barse and Clay and Lisa Barse; and he was grandfather to Isabelle and Alden. To send flowers or a memorial gift to the family of Mr. ROBERT PEIRONNET BARSE Jr. please visit our Sympathy Store.
To order memorial trees or send flowers to the family in memory of Mr. ROBERT PEIRONNET BARSE Jr., please visit our flower store.