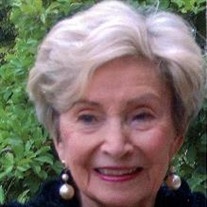 FORT WORTH -- Robina Bailie Drakeford, was born May 9, 1916 in Troon, Scotland. She received the gift of Eternal Life on November 7, 2018. SERVICE: A celebration of her life will be held at 2:00 p.m. Thursday in the sanctuary of Broadway Baptist Church, 307 W. Broadway Avenue. MEMORIALS: In lieu of flowers, consideration of contributions to Broadway Baptist Church, in Robina’s memory, is suggested. Robina met the love of her life, John William Drakeford, in Sydney, Australia while he was training for the Australian Empire Games as a race walker. In 1955, John and Robina moved their family to Fort Worth where John accepted a teaching position at Southwestern Baptist Theological Seminary. Married for 62 years, Robina was always at John’s side as they traveled the world conducting marriage and family conferences and leading group tours of England and Scotland. Upon retirement, their ministries focused on delivering monodramas featuring the pillars of the Christian faith. This gifted, tireless, and energetic pair touched the lives of generations of students, friends, and family members. Once asked if John was the head of the household, Robina replied, “Yes, but I am the neck.” For 102 years, Robina lived a principled life devoted to God and her family. She was known to her many friends as an avid tennis player who played well into her 90’s and who also practiced T’ai Chi. A gracious entertainer, people were drawn to Robina because of her inspiring, positive attitude. She could always find something positive in any situation or person she met. Friends of Robina say she always ended any conversation with, “I love you." The Drakeford family would like to acknowledge Johnnie Green for her years of care and service to both Robina and John. SURVIVORS: In addition to her two sons, Warwick Drakeford of Fort Worth and Brenton Drakeford and his wife, Sharon, of Dallas, Robina is survived by her grandchildren, Kim and Amy Drakeford of Fort Worth, Sean Drakeford and Ian Drakeford of Austin; six great-grandchildren; 16 great-great grandchildren; and her sister, Eve Lumb and her husband, Ray, of Malua Bay, Australia. For God so loved the world that he gave his one and only Son, that whoever believes in him shall not perish but have eternal life. John 3:16 To send flowers or a memorial gift to the family of Mrs. ROBINA BAILIE DRAKEFORD please visit our Sympathy Store.
To order memorial trees or send flowers to the family in memory of Mrs. ROBINA BAILIE DRAKEFORD, please visit our flower store.