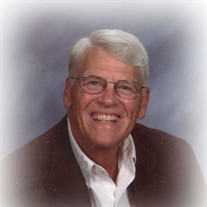 FORT WORTH -- Roger Eugene "Butch" McInnis passed away peacefully Saturday afternoon, Dec. 31, 2016, due to complications from Multiple Sclerosis. Mr. McInnis was 72. Service: 11 a.m. Thursday in the sanctuary of Arborlawn United Methodist Church, 5001 Briarhaven Road. Family and friends will gather in the church's Lower Concourse following the service. Military honors will be given at 2:15 p.m. Thursday in Dallas-Fort Worth National Cemetery. Memorials: In lieu of flowers, Roger's family would appreciate consideration of contributions in his memory to the causes important to him, Mindset Charities (http://mindsetfitnessandyoga.com/mindset-charities), National Multiple Sclerosis Society (http://www.nationalmssociety.org/Donate) or First United Methodist Church of Gordon, Post Office Box 134, Gordon TX 76453. Born Nov. 12, 1944, in Temple, Roger was the son of Oscar Eugene and Evelyn Lee Tulloch McInnis. He grew up in Mansfield and attended Mansfield High School where he was class president and drum major. In 1963, Roger attended Texas Christian University and met his wife, Susan Gray; they were married in January of 1967 and graduated that spring. Roger earned a bachelor's degree in accounting and was a proud member and two-time president of Lambda Chi Alpha fraternity - faithful brothers to this day. Directly after graduation, Roger entered the United States Navy in the Supply Corps. For 27 years, he served his country with honor and integrity, earning his MBA at Naval Post Graduate School. He received multiple commendations, including the Meritorious Service award four times and the Legion of Merit, earned early officer promotions and was selected to attend the National War College. Upon retiring as Captain in 1994, Roger and Susan returned to Fort Worth where Roger was hired by Tandy Corporation. He retired as Senior Vice President from RadioShack in 2004 to enjoy life with Susan and his family in Fort Worth and at their house on Lake Palo Pinto. He loved spending time with friends at all things TCU, volunteering at Colonial Country Club's golf tournament, fishing in his boat and serving First United Methodist Church of Gordon. Survivors: In addition to his wife of nearly 50 years, Susan, Roger is survived by his children, Marilee and Roger; his wife, Catherine; grandchildren, Emma Claire, Eleni and Gray; sister, Trish Thomas; nieces, nephews and cousins and their families; and countless friends. To send flowers or a memorial gift to the family of Mr. ROGER EUGENE "Butch" McINNIS please visit our Sympathy Store.
To order memorial trees or send flowers to the family in memory of Mr. ROGER EUGENE "Butch" McINNIS, please visit our flower store.
Send a Sympathy Card